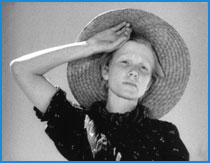 The Fourth volume of the Unseen Cinema set is devoted to "Inverted Narratives", essentially innovations in cinematic storytelling technique. As such, most of the interest lies in the technical nature of how the narrative flow is constructed, less in the actual content of the films which ranges from cliched to silly to amateurishly surrealistic. Two major exceptions. "Black Dawn" (also know as "Dawn to Dawn") is a beautifully shot, if poorly acted, morality play concerning an abused and housebound daughter of a farmer (the stunningly beautiful Julie Haydon--seen above--evoking a 1930s version of Liv Ullmann) who meets a dashing young man--melodrama ensues. I noted in some imdb trivia that Ms. Haydon supplied Fay Wray's screams in "King Kong".

The other is a wonderfully chilling depiction of the Saki story, "Sredni Vashtar" by David Bradley. Shot in silence in the early 40s, one of its weirder aspect is the dialogue being dubbed in decades later by Bradley himself. All the more weird in the that characters are two women and a young boy.

Oh yeah, and then there's this guy from "Even As You and I"--loved his face: 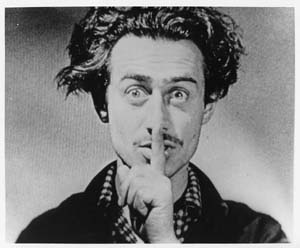