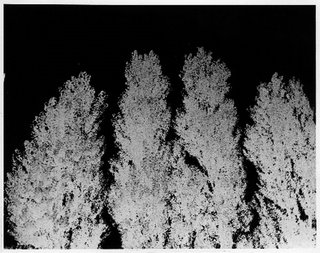 The fifth volume of Unseen Cinema is titled "Picturing a Metropolis" and, sure enough, deals with early evocations of a rapidly growing Manhattan. It's easily the least aesthetically interesting of the discs thus far. The earlier films are essentially panoramas and tracking shots of the city while many of the later ones are often breathless homages to skyscrapers and bustling city-dwellers, the sort of thing that was doubtless pretty new and cool when shot but--perhaps through no fault of their own--come across as fairly corny and cliched nowadays. That may be an unfair judgment but few of them, to me, had the inherent poetic eye to allow them to transcend what came after.

There were several exceptions, including G.W. "Billy" Blitzer's "Interior New York Subway 14th St. to 42nd St" (1905) which tracked the rear of a subway car as it sped uptown, the lighting being provided from a pacing flatbed on an adjacent track; beautifully done. Rudy Burckhardt's "Pursuit of Happiness" (1940) was an effective, and intentionally silent, study of city walkers and, again surprising to me, the Busby Berkeley number, "Lullaby of Broadway" (1935) was impressively snazzy. btw, throughout the set, in most cases, the producers of "Unseen Cinema" have seen fit to include their own musical accompaniment when either the original soundtrack was unavailable or, I imagine, with the assumption that live music would have been played whenever these things were shown. A mistake, imho, as the new contributions, try as they might to sound "period", tend toward the bland.

My favorite piece, though, was the concluding "Autumn Fire" (1930-33) by Herman Weinberg. Running some 22 minutes (the longest one on this disc) it manages to survive a schmaltzy, tired story line (Lovers who've fought, she moping around in the country, he moping around in Manhattan) by concentrating on and contrasting beautiful "nature" shots with equally well-observed urban portraits, some of them coming close to the sort of thing Ralph Steiner was doing around the same time.

Throughout most of the films, though, I found myself looking at them more as anthropological/historical documents than as aesthetic objects, trying to identify this or that building or landmark and, more than anything else, watching the people going about their daily business, picking up hints on how things were done then. One of the striking things, up until about 1930 as far as you could tell by what's in evidence here, is the strictness of dress--the buttoned up, tie-wearing crowds. And the hats! Jeez Louise, you look around in vain to find somebody, anybody, not wearing a hat! From upper class twits to guys digging the holes for future skyscrapers. As an inveterate hater of headwear, I found this very disturbing. Thank goodness that sanity eventually prevailed.
Posted by Brian Olewnick at 1/16/2007 09:28:00 PM