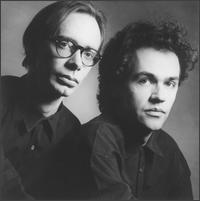 I never saw DNA during their brief existence. I'm pretty sure my first exposure to them was on the Eno-produced album, "No New York" that my brother Drew owned that came out in '78. I liked what I heard then, however (this in a period where I was listening to almost nothing but avant-jazz) and Lindsay's name stuck in my head enough that when I saw things he appeared on a couple years later like the first records from Kip Hanrahan and the Golden Palominos, I picked them up. So when I noticed his gawky, hyper-dorky mug on the front of an album called "Envy", leading a bunch of musicians grouped under the iffy name, Ambitious Lovers, I went for it. They only made three albums--I have the first two on vinyl, the last, "Lust", on disc--though I assume, by virtue of the titles that severn were planned. Two salient facts stood out from "Envy", the first release. One was incorporating the once-removed funk of current (early 80s) Talking Heads into a looser, more openly avant format. The second, more interesting to me at the time, was threading Brazilian motifs and instrumentation into the mix, a music I was fairly ignorant of then. A year after the first Lovers' record, Lindsay would organize and produce Caetano Veloso's spectacular US debut album on Nonesuch. It was a good, gutsy move on Lindsay's part, revitalizing the music he'd been brought up on in Brazil, hearing how it could mesh with that of downtown NYC.

Listening to it now, the main drawback is Scherer, more particularly that highly temporally localized sound of the synths and drum machines he employs. Still, pieces like "Too Many Mansions" and "Dora" (a lovely Brazilian ballad) hold up pretty well and some of the funkier numbers kick relative butt and have some strong hooks. As tends to be the case, the albums dwindle in effect as time went by; I think they achieved a tiny bit of commercial success, that might have been a reason. Some of the Zorn troops appear on "Greed" from '88 and smooth things out a bit too much. Overall though, the two vinyls sound better today than I might have guessed.
Posted by Brian Olewnick at 1/06/2007 09:14:00 AM

I have all three (first on CD, second on promo cassette, third on vinyl...don't ask me why, it just happened that way) and I concur that the first is by far the most interesting. Do you like that first Golden Palominos record, Brian?

Oh yeah, like it a bunch. That was one of the first "rockish" things I bought after about 7-8 years of almost nothing but jazz, partially due to the presence on it of a guy I knew from college, Roger Trilling (turntables).

But I think the second one os great as well, one of my favorite pure rock albums. (I recently located the CD that contains both # 1 & 2) The third sucked royally and after that, imho, they were hit and miss though the last one, the spoken word deal with poet Nicole Blackman, is pretty good.