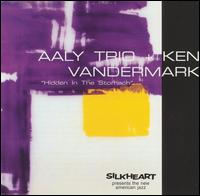 Stuck way up in the far left hand corner of the leftmost wooden CD box in my niche devoted to CD storage is "Hidden in the Stomach", the first recording from the Aaly Trio (with Ken Vandermark), issued on Silkheart in 1998. Ironic in a sense that Aaly is the first up for my BTMC project as it's just about the last serious jazz ensemble that I had any great enthusiasm for, and that's since pretty much expired. In fact it's one (out of many, as we'll come to see if I keep this up) that I reviewed very positively for the All Music Guide

The name "Aaly", in addition to pretty much guaranteeing first slot in the bins, was derived I take it from the Art Ensemble of Chicago piece, "Lebart Aaly" (a not-quite-anagram of Albert Ayler) which appeared on their superb album, "Phase One", recorded in 1971 and originally issued in the US on Prestige (elsewhere on America and maybe a couple of other labels, also titled otherwise). Not sure if it's still the case, but the first several Aaly "Trio" discs included Vandermark giving them, along with leader Mats Gustafsson an extremely studly frontline and the music does tend toward the testosterone-driven. There's a place for this, I guess, but damn if it doesn't become tiresome over time. Catching Mats live you have to be impressed by how much he puts into a performance, forehead vein athrob, braced like a first-baseman leaning toward a peg from short, massive baritone in hand. But there's only so much orgasmic wrenching one can tolerate before saying, "Enough! How about listening once in a while instead of automatically exploding?" Thing is, Gustafsson has it in him. He's done some pretty fine, more delicate work in duos with Jim O'Rourke, his solo project of Steve Lacy covers and, notably, on his fine large ensemble project, "Hidros I". He's also so much better, stronger player than Vandermark it's almost ridiculous. Have to give KV credit for having the nerve to get up on a bandstand with Mats; it's just no contest even when the latter goes overboard into technique for its own sake (which happens far too often). I caught him a few months ago at Stone with the band he co-leads with Joe McPhee, The Thing. Their gimmick, and I'm afraid that's what it is, is the occasional cover of some rock tune you wouldn't anticipate, like Black Sabbath's "Iron Man". That particular frisson lasts for a couple of minutes before inducing yawns. otoh, they did perform the wonderful Mongezi Feza song, "You Ain't Gonna Know Me Just Because You Think You Know Me" from Louis Moholo's spectacular Ogun album, "Spirits Rejoice!" That was a nice little choice there. But all too often, the theme would be stated and Gustafsson would unhesitatingly launch into upper register, high volume histrionics. Not very much less boring than the theme-solos-theme approach you hear in any billion jazz bands no matter how much shrieking. Too bad, really. (McPhee fared much better that evening).

Actually, the real, lasting presence on this disc and others by the band is bassist Peter Janson. A deeper, richer sound you'll not often come across on bass. Don't have any idea what he's been up to these last few years.