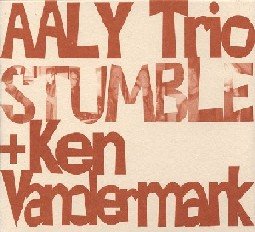 Browsing through my record collection

The follow-up recording by Aaly, done in January, 1998. Amazing it's eight + years old already, especially in the sense that, good though it is, I'm really almost totally uninterested in the genre anymore. Nice blocky cover. Aaly, probably through permanent guest Vandermark's influence, had a propensity for doing covers, often intriguingly chosen ones. While Charlie Haden's "Song for Che" has been something of an avant standard at least since its appearance on his own fine Liberation Music Orchestra album from 1969 (if not its earlier showings as part of Ornette's sets in '68), it holds up to varied interpretations. It's just such a fundamentally strong and heartfelt piece that, if approached with at least a modicum of guts and grit, it'll carry the day. Aaly does a bang-up job on it here.

Wobbly Rail. Great label name, derived, I assume from the Cecil Taylor composition, "Excursion on a Wobbly Rail" but still inspired.
Posted by Brian Olewnick at 5/29/2006 09:13:00 AM