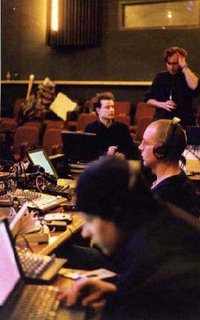 Keith Rowe participates in an improvising ensemble called MIMEO (Music in Movement Electronic Orchestra) made up of some ten to twelve musicians playing laptops, electric guitars, digital and analog synths and assorted electro-detritus. It's a rather massive creature and a fairly bureaucratic one, the musicians' hometowns scattered across Europe (sometimes a US citizen makes his/her way in too), each having their own projects. So they've probably only performed together 6-7 times I think; one such is coming up at a festival in Holland next month. Keith is kind of the eminence grise of the group, the past and current master of the genre who, as nearly as I can figure it, is also the one one tends to organize the ideas behind most of their performances (see the marvelous "Hands of Caravaggio" on Erstwhile) .

He has a rather wonderful idea in the works, something I hope sees the light of day sometime, something that cuts, if not to the heart, pretty close to some vascular arteries of what contemporary improvised music is about today. The idea is essentially this: Each musician, at home or wherever they please, will record music onto a 60-minute disc. They'll be asked to only supply a few minutes of sound, spread over that hour. The crucial notion is that they are to improvise this music as though they were performing in concert with the other members of MIMEO, as cognizant as possible of what they think these other musicians would be doing during that hour. They know each other well, they have a good working knowledge of how they all tend to approach these improvisations. There's a little something about this idea that's reminiscent of various Prisoner's Dilemma situations including Douglas Hofstadter's Luring Lottery published in Scientific American in the 80s. Each musician will send his/her disc containing the several seconds of music to one individual who will, without listening to any of them, "pile" them atop each other and create a single disc. I should mention that the inspiration behind this project is the painter Cy Twombly (visual artists often serving as the basis for many of Rowe's ideas). If you're familiar with Twombly's paintings, you'll know there's often a great deal of exposed white canvas, not dissimilar to the amount of silence one might expect to occur on this disc.

After the disc is ready, it will be issued by a company without having listened to it. The first persons to hear the music created by MIMEO will not be the musicians, not the mixer/masterer, not the record company. They'll be the people who purchase the disc.

Greets to the webmaster of this wonderful site. Keep working. Thank you.
»

What a great site, how do you build such a cool site, its excellent.
»