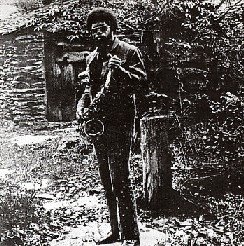 On October 29 1971, a senior at Poughkeepsie High School, I attended a five-band performance at the school's auditorium. Four of the bands were, I'm guessing in recollection, local rock groups. The fifth was Joe McPhee's Survival Unit. I didn't know anything from jazz proper at this point. Though I'd been listening and greatly enjoying a number of rock bands who, I would later realize, were heavily indebted to jazz (Zappa, Crimson, Soft Machine--I think I just began listening to Beefheart around this point), my own previous exposure had been quite limited. My Dad had taken me to a Giants of Jazz concert at Dutchess Community College, maybe the year before (Dizzy, Al McKibbon, Sonny Stitt, I think...not sure who else) and I think I'd heard Bitches Brew at a friend's house, but my knowledge of contemporary (Coltrane or post-) was virtually nil. So I had little idea what the hell I was hearing that evening. But I remember specifically liking it.

McPhee (Tenor and trumpet), Byron Morris (soprano and alto), Mike Kull (piano--I think it may have been electric) and Harold E. Smith (drums). There was no way in the world I could understand what was going on--it was entirely outside my range of comprehension--but there was something about it that struck me. I recall commenting to a friend that it was easily my favorite set of the night.

I know it was Oct 29 1971 because, when I mentioned the event to Joe a few years ago, he absolutely remembered the gig and said that the next day, they did their recording at WBAI with Clifford Thornton joining the crew. I picked up this disc (hat OLOGY 624) a couple days ago. I'm guessing that, aside from Thornton's presence, this was more or less the material they performed that night at PHS, though perhaps they rocked it up a bit. It's reasonably out-there stuff, very much in line with work Cecil Taylor was doing at the time, for instance, though as would be the case for a very long time, McPhee far outclassed his collaborators, Thornton excepted. Listened to today, it's perhaps more of an historical document, his musical ideas just beginning to coalesce, though "Song for Lauren" is as achingly beautiful as ever.

I'd meet Joe about four years later through our mutual friend (my painting professor at Vassar), Alton Pickens. In the intervening years, after awakening to modern jazz in the spring of '72, I'd picked up several of Joe's records on hat HUT, but that evening still lingers warmly in the memory as a key event in my opening to larger, deeper forms of music, for which I thank Mr. McPhee.