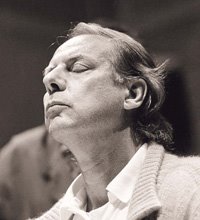 So I was listening to a couple of pre-AMMMusic discs that Eddie Prevost had been kind enough to forward my way (from 11/65 and 03/66) and, aside from enjoying them purely as music, was attempting to discern any overt influences. You can hear Sun Ra pretty clearly, I think, things like the "Magic City" session seem to have reverberated strongly. Maybe some Ornette from his contemporary trio with Izenson and Moffitt, especially when he picked up the violin. But I was wondering about any influences coming in from outside of jazz and thought that, perhaps, they'd heard some of Stockhausen's electro-orchestral work by then as it had become relatively "popular" in the early 60s.

Now, I'd never been especially keen on ol' Karlheinz. Pretty early on, when I was in college, I'd picked up a couple of things including the 'Microphonie' album which I actually did enjoy a bunch. But hearing various works over the years on radio and elsewhere, I hadn't really latched on. Maybe some of this is due to what I'd read about him and his philosophy, not the most attractive things in the world. In any case, I thought I should do something of a re-listen, for fairness reasons if nothing else, and ambled over to Abbey's to borrow a stack. These recordings ranged from his earliest eletronic experiments (the Etude and Studies I & II from the early 50s) through 'Hymnen' and 'Spiral'.

I still ain't convinced. Too much grandiosity, too much serial baggage for my taste. Nice moments--it was good to hear the 'Microphonie's again (I'd long since lost my album somewhere) and other parts of things, like much of the electronics in 'Hymnen' were fine, but overall there's nothing here that hits me as hard as, say, Xenakis. I'm probably missing something but, for the time being, the Stock-y guy is out.
Posted by Brian Olewnick at 5/24/2006 10:43:00 AM

Super color scheme, I like it! Keep up the good work. Thanks for sharing this wonderful site with us.
»

I say Stock-Up. HYMNEN is the greatest EAI (Electro-Acoustic Intuition) work of the century. STIMMUNG started the ball rolling on Spectralism. That's about all I CAN say.

Everyone falls under that proto-umbrella: Scelsi, Xenakis, La Monte Young, Tenney, Radeslescu, Saairaho, Lachenmann, Grisey, even Feldman's chromatic clusters begin to ooze into the spectral sound world, thanks to "duration".

When I think: Wagner, Mozart, Bach, Bartok, I'm generally overwhelmed with joy by of the sheer "grandiosity".