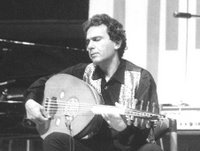 Browsing through, we come to the Lebanese oudist Rabih Abou Khalil. I mentioned I file my records and discs in strict alpha fashion, chronological within artist? I wasn't sure how to handle this fellow. Abou, I believe, is kind of a familial honorific, perhaps similar to "van" in German. I think? So I debated between A and K for ol' Rabih, eventually settling for the former simply because that's where I've generally seen him filed in record stores.

In any case, I picked up his "Odd Times" on Enja back around its release date, 1997 and the follow-up, "Yara". Khalil, though brought up (I'm assuming) playing traditional Lebanese music, gravitated toward a mixture of trad and jazz forms. "Odd Times" is pretty good for that type of thing--long flowing lines, spirited improvisation. Howard Levy is on harmonica and the excellent Michel Godard on tuba, serving to establish an unusual sound pallette. I'd say more, maybe, except that my copy is out on loan (probably to Carol, but I always forget who I lend these things out to). "Yara" was far blander, enough so that I lost the impetus to follow up on further recordings. They might be fine, but I'm guessing no very different ground is covered. It's kind of an interesting thing when you make the determination with a given artist that you're not likely to greatly enjoy work after x-date. Obviously, it's partly a practical decision and, even more obviously, you're probably wrong once in a while. But I bet, in general, I do pretty well at it. In other words, if I were to pick up the four discs Khalil has issued since "Yara", I bet that overall, I'd be less than thrilled by them, though they're likely perfectly enjoyable on their own terms.

His series on Enja features some rather unique covers, all shiny, silvered surfaces in deep colors. About evenly balanced between lush and garish, but they certainly stand out....

I note that if you go to All Music Guide's listing for Rabih Abou Khalil, you're presented with a photo of Steve Swallow. Excellent.
Posted by Brian Olewnick at 5/30/2006 12:52:00 PM

Hmm I love the idea behind this website, very unique.
»

Your are Nice. And so is your site! Maybe you need some more pictures. Will return in the near future.
»