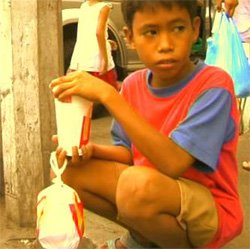 On Friday, after meeting my friend Emily to see her furniture shop in Long Island City and have a lovely lunch (if I ever get around to publishing embarrassing personal histories, my reacquaintance story with Emily will be up there), I subwayed down to East 12th St. to catch "Cavite", an independent, extreme low-budget thriller by Ian Gamazon. It's a good, tight movie, taking the conceit of the godawful "Phonebooth" and working something interesting out of it. But in addition to the thriller aspect (which was gratifyingly harsh and unsentimental, a major coup from a filipino director given that culture's general prediliction towards the soppy--I say this as an asawa of 26 years...), the most striking thing was the handheld camera's journey through the impoverishment of Cavite City, providing a vivid, sad, tough image of how most filipinos actually live. The youngster pictured above was the only other character aside from the lead who was on-screen for more than a minute and kind of summed it up: an essentially smart kid who, more likely than not, will never escape his immediate environs. Not a great movie in many ways but well worth seeing.

Went up to the Met to meet my dear friend Carol. Got there early so went in to see the Girodet show which I guessed, correctly, that she'd have little interest in. Justifiably so. I'd known his work since college days, largely from a book on David and Napoleonic painting I'd had. He's not very good, but certainly is pretty odd. His Ossian painting is seriously weird. Paid my respects to the purple Rothko and the Agnes Martin paintings in the modern wing, the two works from that area which I'd choose if a museum theft was ever in the offing. When Carol showed, we went to the Betty Woodman ceramics show (not convinced....), the lovely assemblage of late Klee drawings and the Kara Walker exhibit (again...ok, but too didactic for my blood).

Then down to East 9th to meet Linda for dinner. Good times.

The Ambitious Lovers - Lust (Island? - I forget)
The Art Ensemble of Chicago - Fanfare for the Warriors (Atlantic)

Your are Excellent. And so is your site! Keep up the good work. Bookmarked.
»