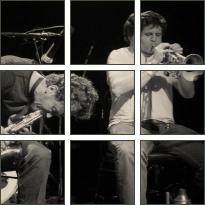 A few words about nmperign. An improvising duo out of Boston, Bhob Rainey (soprano sax) and Greg Kelley (trumpet/electronics) have provided several of the more enjoyable concert experiences I've had over the last several years, including the single finest integration of dance into an improv performance I've probably ever witnessed, at Nancy three years ago (with Yukiko Nakamura). I've also heard Greg in a number of other projects that have been equally impressive, too many to recount. Twice, iirc, I've witnessed nmperign (I forget the origin of the name at the moment, but I'm sure it's available on-line) in the company of Jason Lescalleet, a strapping guy from Maine who looks as though he'd be equally at home trapping bears as prowling around a stage, stringing loops of abstract sound between ancient tape recorders.

nmperign and Lescalleet have a new double disc out (out June 1st, I believe) on Intransitive Records titled "Love Me Two Times". Very little of it calls to mind the Doors. It is, however, unusual in that the volume/aggression range is a good deal more than I'd heard from the group before which tended toward the microscopically quiet. Here, a good half of the tracks (there are 23 of them, another anomaly) are loud 'n' abrasive, often to deleriously good effect. I'd expected more of a rich drone emphasis, something Lescalleet specializes in, and indeed there are a handful of gorgeous examples of that here. But these cuts, amassed over six years, also include everything from snatches of recorded conversation to Julia Child captures to enormously loud shrieks and clatter, evincing a far wider pallette than I'd previously experienced from them. An excellent "sampler", as it were.
Posted by Brian Olewnick at 5/25/2006 02:10:00 PM

i keep finding your blog whilst searching for other things. it's always nice to find myself here, i always read something interesting. keep up the good work.

incedentally, you should moderate your comments... the above three are all spam.

Hey, thanks very much.

It's strange--I get e-mail notification of any new comments (like your just now) but the spam slips in unannounced. When I happen to come across it, I delete them (like I just did on this post) but I don't think it occurs all that often, though when it does it tends to be clustered around a given post.

Anyway, I'm reluctant to require entering squiggly letters in order to comment unless the situation gets out of hand.

But I do appreciate the nice words!