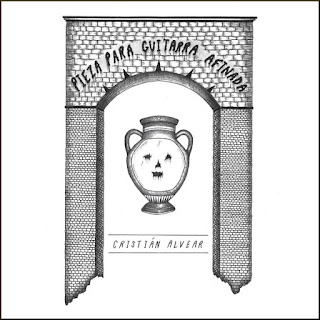 A 90-minute piece for solo guitar available as a cassette or download file. The model here is Stie's 'Vexations'. Generally, Alvear plays single note or spare chords at a fairly regular, slow interval, one every four or five seconds, allowing the sound to decay, generating overtones and distortion buzzes along the way. Sometimes there are short, four- or five-note sequences, kind of arpeggios. He'll stick with one more or less similar approach for a good while, i.e., the "same" chord played in the same manner for several minutes on end, though there's always a certain amount of fluctuation in the tone hanging and decaying in space. Recorded in  one take, it's an exercise in concentration and determination on the part of both performer and listener. Alvear allows how pure replication of portions of the score as written is impossible and that's part of the piece's character. It's also a large part of the fascination as listener, noting the variations, the slightly altered tinges from one iteration to the next. A lovely and oddly strong piece, its stubbornness becoming a means to unlock aural pleasures that would otherwise remain unheard. 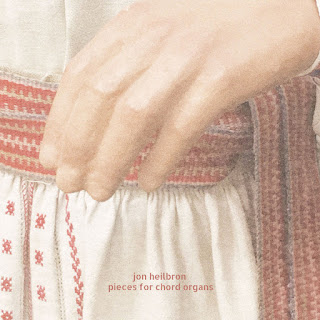 A set of lovely cover images surrounds a set of wonderful music. Heilbron, a bassist by trade, plays two Bontempi chord organs. What's a chord organ? This is.. Basically a small electric organ not terribly dissimilar to an accordion. Heilbron plays two at once, as can be seen in this promotional video from Intonema:

Amusingly, the first sounds one hears on each of the two pieces is the organs being switched on with a sharp click and the onset of, I take it, the noise from the interior fan. He'll often play the same single note on the two instruments, the inherent small differences setting up beats and fluctuations. The notes are held at length, added to to create thick chords, subtracted from to get back to single lines. A kind of drone, but with a grating aspect, a certain welcome harshness imposed by the sound of the machines. In overall tonality, it reminded me a bit of parts of Terry Riley's 'Shri Camel' (1975), though far more concerned with pitch relationships for their own sake. These chords, from two slightly conflicting sources, create absolutely rich and complex sound pools in which to bathe. A very unique sound and a very rewarding one--highly recommended. 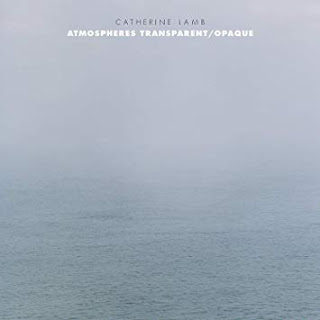 It's great to see Lamb getting more and more exposure, one of the finest younger composers working in this area, imho. The main piece on this disc is her 'Prisma Interius IX' (2018), a 53-minute work. This is followed by seven 'Overlays Transparent/Opaque', each lasting between one and two and a half minutes. The works are performed by Ensemble Dedalus, here consisting of Didier Aschour (electric guitar, director), Amélie Berson (wood and metal flutes), Cyprien Busolini (viola), Yannick Guédon (voice, treble viola da gamba), Thierry Madiot (trombone), Pierre-Stéphane Meugé (saxophone, synthesizer), Christian Pruvost (trumpet), Silvia Tarozzi (violin) and Deborah Walker (cello, voice).

Rebecca Lane's excellent and extensive liner notes go into great depth on both the music's structure and the experience of performing it and offer better insights and descriptions than I could possibly do. I'll just say that 'Prisma Interius IX' goes through eight sections, beginning with strings of varying pitch, expanding and contracting with more or fewer instruments, eventually ending with the entire ensemble. The notes tend to be long-held, though when they end, cut off quickly. There's indeed a kind of prismatic effect, of subtle patterns being projected. Through much of the work, use is made of the Secondary Rainbow Synthesizer, the instrument designed by Lamb's partner, Bryan Eubanks, which was heard on the 2018 Another Timbre release, 'Viola Torros', bringing in sounds from outside the performance space, though subtly enough one doesn't always realize it's there.. The blend of acoustic and electronic instruments with voice is also quite thrilling, creating separate lamina that flow alongside one another, melding just enough but keeping their own personalities (as ever, Dedalus handles the music with wonderful sensitivity). There seem to be ghostly references to pre-Baroque music as well. A fine work, as incisive as it is dreamy.

The seven "overlays" are not mere miniatures but careful studies in which instrumentalists are asked to proceed "from transparency to opaqueness"; each feels as though it could be expanded upon substantially.

Lamb has become one of my very favorite contemporary composers. This release is yet another fine addition to what's developing into an extremely impressive canon.