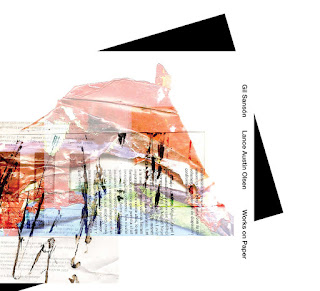 Last year, Another Timbre released a superb collection of pieces from Olsen, 'Dark Heart', which included an amazing work based on a graphic score of Sansón's called, ' Meditation on the History of Painting'. This two-disc set is a kind of extention of the process begun there and it's just as rewarding.

To get the technical details out of the way, Sansón and Olsen prepared graphic scores. Olsen is an accomplished painter and, to some extent, treats his visual work as a kind of potential musical score so in his case, it was "simply" (nothing simple about it) one of his works. I think--I could be wrong--Sansón's was constructed with the idea of aural realization in mind. In any case, the scores were sent to each other, Sansón residing in the troubled city of Caracas, Venezuela, Olsen in Victoria, British Columbia, and they each produced the two renderings we have here.

Where to begin to describe these complex, dense but transparent works? One thing that struck me over the course of both of these disc is each musician's astounding sense of sound, of how crisp, lucid and three-dimensional everything sounded. There were times when I felt one could almost disregard the context and simply wallow in the gorgeousity of the sound world. The sets were mastered by Taku Unami; I imagine he deserves some credit here. Each offers two interpretations of the other's score. Sansón's 'Pra Mim #2 - Works on Paper', begins with a fine example of the sonic vividness I was referring to, a range of prickly raindrops (?) over a background hum, great separation, before we hear text read by Al Jones. This text is curious. No reference is given and it sounds somewhat fragmented (it resurfaces throughout the piece, with iterations of the odd phrase, "sailing on concrete"). I get the sense of a son's remembrances of his veteran dad, a difficult person, whose prejudices and life-views have been to some extent transmitted to his son (the section on "Rhodesia, or whatever the fuck it's called now that the Mau Mau have taken over") It's spoken deadpan, largely uninflected, a counterweight to the vibrant soundscape surrounding it, which also includes other works by Sansón, for instance a lovely piano piece played by Dante Boon. The music just flows past, the text eventually lapping itself. The music maintains consistency while constantly expanding and exploring new byways. The second version has some threads attached back to the first, including "sailing on concrete", this time sung, as it were, in ghostly fashion. Sansón limits his resources here, concentrating on guitar, melodica and field recordings, creating a slightly less dense, though still rich and active sound-world. I should mention how much of an affinity I find between the music in both of these pieces and the Olsen painting, which is reproduced inside the CD sleeve; impossible to pinpoint, but the feeling is there. 'Pra Mim #1 - Fail Better' is dreamier, still gritty but wafting more than flowing, smoky, a perfect offset to its companion piece.

The Sansón score with which Olsen works, reproduced on the cover and interior, looks to be a collage with multi-colored plastic material text and ink marks. On 'Meditations #3', we first hear a distorted recording of a Baroque (?) choral work, possibly a mass? This segues into a haze of electronics in which we encounter what will be a repeated refrain, a man saying, "Hold me. Don't hit me.", imparting a tragic air--one immediately thinks of current church-related scandals, especially given the opening sounds. Olsen creates a swirling vortex around this poor creature, with echoes of the chorus, harsh shards of guitar, shruti box and any number of amplified objects, again an example of the enormous, transparent/granular depth achieved. There's an ebb and flow here, the sounds attenuating into icy slivers, a lone, ambivalent guitar chord like an alarm, then a complete cessation. When the music returns, we're still in a church atmosphere, but more warped, even subtly nightmarish, with twisted voices, errant bells and sinister, crunches like footsteps on gravel. The sense of foreboding continues, siren-like wails and dire hums coursing through the grimy clatter and wraith-like voices. 'Meditations #2' is chillier still, with odd ray-gun, zapping effects scattered over a low, ominous throb. The drone of either the sampled organ (played by Debora Alanna from another of Olsen's works, 'Craig's Stroke') or the shruti box becomes prominent, creating a huge space between it and a series of sharp clicks, as of glass marbles against a ceramic surface. The piece kind of splays out from here, as though released out of the confines of the crypt into the town outside, rustling separating from hyper-low thrums, bell-tones from soft pops from guitar strums, each meandering off, the zaps heard behind, still menacing but slightly less so.