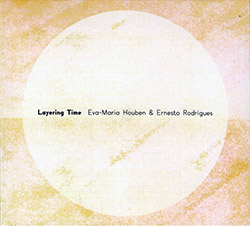 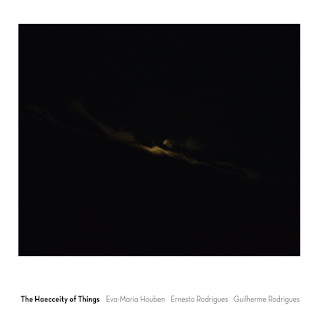 These two very fine recordings form a pair, each constructed (as far as I can tell) in somewhat similar fashion: Houben creating music in one place, Ernesto Rodrigues (and his son Guilherme on the second disc) adding to it at another and mixing the results. On 'The Haecceity of Things', the dates indicate Houben provided the seed while on 'Layering Time', the music was more simultaneously created. "Haecceity", by the way, means "the property of being a unique and individual thing" though Jesse Goin, in his liner notes, defines it more succinctly as "thisness". No matter, really, how they were put together, the results are quite wonderful.

On 'Layering Time', an excerpt of Houben's work 'gestures' (for piano) is played by the composer; she also contributes recordings of ravens. Rodrigues adds his viola. In fact, one first hears what sounds like a family in a park, traffic and sirens in the distance, interrupted by high, clear, widely separated piano chords, soon growing thicker and deeper, with intervening, simple lines, weaving among pigeons and, I take it, ravens. Extremely beautiful, very "Houben". Some five minutes in, a sandy kind of wash appears briefly, presumably Rodrigues drawing something across his viola. It re-emerges with slightly greater force and variety, gaining equal footing with the piano and the ravens (who have now taken over the external soundscape). This is pretty much the tack taken for the piece's 48-minute duration. Other sounds, like church bells, enter in, Rodrigues occasionally strokes some richer string tones, but essentially we're in this wonderful stasis, a floating environment of consistent careful and imaginative placement of notes and sounds, just this side of regularity, circulating amidst the unanticipated noises from outside, all elements equal. Just a gorgeous work.

For 'The Haecceity of Things', Houben is on a church organ, recorded some three months prior to Rodrigues' viola as well as his son Guilherme's viola d'amore and field recordings. Houben does amazing things with organs and here begins with a grainy, quiet tone (an interesting beat in the background), offset with subtle ambient recordings bearing a hiss and faint passing traffic along with distant plane engines. Again, it's near the five-minute mark that one of the strings (I can't tell which) enters, paralleling the organ line but richer, soon occupying the piece on its own, calmly sawing back and forth. A cricket appears, then is heard solo. :-) Perhaps in accordance with the title, there's more of a sequencing of sounds, with some overlap to be sure, rather than the steady-state heard in the prior release (the younger Rodrigues did the mix; I assume that's responsible). Though when both strings are present, undergirded by some hyper-deep organ, the effect is magnificent. An extended silence more than halfway through the hour or so, then astringent strings, soon buttressed by dim, low organ. It's a different feel; the first section seemed, dark and damp as well as episodic. Now things open up into a dry, hot realm, more consistently of a piece. It's a more complex structure than 'Layering Time' and equally as beguiling.

Houben's body of work is among the strongest of which I'm aware and these two items, enormously assisted by the contributions of Rodrigues father and son, extend that legacy. Deep music.