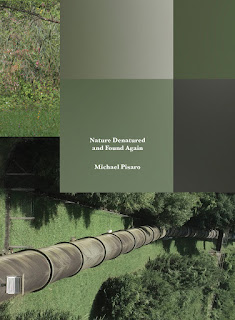 Generally speaking it's tough enough, for me, to begin to attempt to encapsulate in words a "standard" recording from Michael Pisaro, much less something like this one, a five-disc re-imagining and restructuring of a five-year long, extremely complex project. First, the basics:

In 2011, Pisaro was invited by Joachim Eckl to design a project to take place in Neufelden, Austria, a charming looking village bordered by the Große Mühl River. He chose to organize two-hour walks along the river that would occur each weekday at 3PM. During the course of their walk, participants would encounter six bench/shelters in which a musician would be dwelling. They would stop and listen for 12 minutes, then continue on, hopefully incorporating the surrounding sounds into those produced by the musicians. The players were: Antoine Beuger (flute), Jürg Frey (clarinet), Marcus Kaiser (cello), Radu Malfatti (trombone), André Möller (electric guitar), Kathryn Gleasman Pisaro (oboe, english horn). I pause to mention that, when I become king, each town in my domain will be required to have Radu Malfatti sitting on a bench, playing, for a certain amount of time per day. Of course, as is generally the case with Pisaro's music, it was more complicated than that, with differing situations taking place each day, but all of this is covered in the extensive notes. Pisaro staged this event once a year for five years, 2011 - 2015. Well, almost, but more on that later.

For this release, Pisaro has, for the most part, taken material from each year and reworked it into a kind of simulacrum of the original experience, sourced from there, conveying something of the original feeling, but resulting in an entirely new and vast work. Each disc is 48-minutes long, divided into four 12-minute tracks (if one possesses five CD-players, you could play them simultaneously). Each "year" comes with a score  or site photo, a recording date breakdown and a listing of which musician(s) is/are heard on which track.

2011 begins with rain. Other sounds overlap (traffic, etc.) but essentially it's rain, threaded through with discreet sine tones. The sound isn't steady but rather comes and goes in irregular segments and contains varied intensities and fluctuations. The raindrops often have the character of small electrical explosions. The second track is titled, 'Still Life with Cicadas, Waterfall and Radu'. As with the prior cut, Pisaro doesn't simply overlay the collected sound but sculpts them, interpolating sine tones, breaking the sounds into chunks, some overlapping, some finding themselves "alone", dream-like in an unsettling (but very satisfying) way. Again, this oversimplifies things. I'll quote from Pisaro;'s notes just this once (similar ones are provided for each track), to give the reader at least a glimpse of what's going on:

This piece is based on four recordings on the banks of the Große Mühl close to The Station, from four days of the installation in 2011. The grasses hosted many cicadas, including the Cicadetta petryl heard here. (On the second day I played the recording from the first day back, and one could hear the cicadas tune and time their song to the volley of cicada singing emanating from the speakers.) There are many splits, cuts, and repetitions in the piece, along with various frequency shelves, to reveal the anatomy of the many-layered situation.

Next is a gorgeous section featuring Beuger's flute, a very "natural" sounding stretch, though it too has been augmented and adjusted and begins to fragment some five minutes in. Here, as elsewhere, Pisaro manages to convey more than the imitation of having been there--there's a psychological representation of one of many possible reactions one may have had, in a very human way of paying attention, being distracted, shifting one's focus, etc. Very difficult to describe but marvelous to experience once one submits to the procedure. The final track on Disc One, 'Langhalsen' is a different creature again, beginning with very up front electronic bleeps and burbles, segueing to an interplay between Kaiser's cello, a waterfall and overhead airplanes. The shifts here are more drastic, falling into unexpected mini-worlds, including a chilly one, like an old cistern, with Frey's clarinet seeking to provide some warmth, ultimately returning to the surface (birds and children heard, and oboe).

Attempting to describe each disc would be pointless, so just some things that stood out: Frey's clarinet, playing a single tone, turned into a canon and weaving through a waterfall; the sumptuous sine tones ending 2.3; the incredible, unaugmented but amazingly teased apart and reconstructed natural sounds that make up the third disc, 'landscape in black and grey'; Disc Four's imagined year [the event was unable to be held that year, so Pisaro re-imagined the situation with sine tones], layered with an extraordinary range of sines and noise; the unexpected and glorious bursts of melody (and birdsong) that emerge in the final disc, especially Gleasman Pisaro's ravishing oboe.

So much material, so dense, so intricately and airily constructed--a work that will repay listen upon listen for a long time to come.