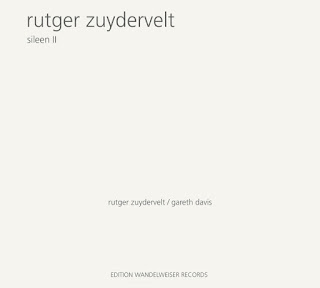 'sileen II' is essentially a long (50-minute), fluctuating drone sourced from Gareth Davis' bass clarinet with sculpting and other modifications made by Zuydervelt. One of the first things I noticed is that while some aspects of the sound--its range, hollowness, etc.--are bass clarinet-y, other characteristics, like any sense of woodiness, seem to have disappeared, so I'm left with a more organ-like impression, albeit enveloped in thin, by no means overbearing wisps of electronics. The sounds appear in slow, slow pulsating waves, structures that seem simple initially but reveal many layers of depth when listened to closely (headphones recommended). Slight variations in pulse frequency, pitch and tone combinations are introduced over the piece's course. Near the beginning, the waves are fairly continuous; little by little they become more discreet, almost to the point of admitting the briefest of silences between events. There's a somewhat more pronounced than usual pitch shift around the 42-minute mark but things flow apace from there. It's hard to say too much else about it, only that what at first might sound impenetrable and self-similar offers much more upon concentrated listening--very satisfying. 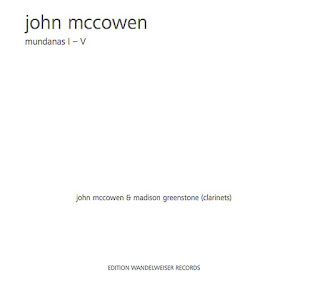 Five pieces for clarinets of various types performed by McCowen and Madison Greenstone. It's hard not to think of the pre-eminent contemporary clarinet duo (in this neck of the woods, at least), The International Nothing (Kai Fagaschinski and Michael Thieke) but while there are similarities here and there, McCowen's mini-ensemble is a unique voice. The first three works, concise at five to six minutes in duration, are for b-flat clarinets and  deal with tones close enough in pitch to cause pulsations as well as overlapping and intermeshing  fingering patterns. Each is a fine document, engagingly straddling the line between acoustic experiment and deeply felt music, in addition providing the listener with a wonderful experience of the clarinet as such. The demi-clarinets in play on the fourth track are, I take their description at face value, clarinets which have had about half of their bodies removed. They sound rather like ocarinas, albeit with a woody tinge. The resultant whoops and watery gurgles are sometimes birdlike, sometimes far more guttural. The final piece, the longest is for paired contrabass clarinets, obviously fertile ground for sonic richness. It's kind of a revisiting of the first track for lower range, two fluctuating lines traveling more or less in parallel but with many small but important divergencies along the way. It seems like there's some electronic processing involved, some very regular, sine-like flutters, though none is indicated on the disc sleeve--maybe amazing technique? Whatever the case, the work is absorbing, beautifully controlled and entirely enjoyable to hear. Looking forward to much more. 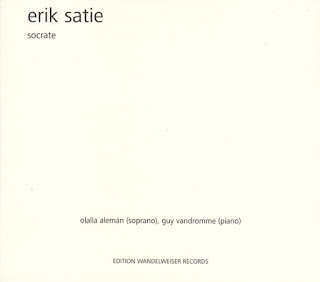 In recent years, Wandelweiser has done an extra-commendable job in expanding their musical world beyond the kind of sounds that, for a while, typified the label. This, in a way, might be the most extreme example yet. Had I heard that Wandelweiser was issuing a recording of Satie's music, I would automatically assume it was from the piano repertoire. Well, only partially so with 'Socrate' for soprano and piano (though there is a version for voice and orchestra). It's extra interesting to this listener as, although I've known Satie's piano works inside and out since the early 70s, I think I'd only heard 'Socrate' a handful of times, not for a long while, and had no distinct impression of it. Well, the rendition here from Olalla Alemán (soprano) and Guy Vandromme (piano) goes the distance in remedying that and does so superbly. The wiki page on 'Socrate' can tell you far more about it than I can and I'm reluctant to assess very much given my unfamiliarity with the material, much less with evaluating the singing in any meaningful way. I will say that I find fascinating to hear snippets of almost intact music from the piano works popping up here and there (played with great sensitivity by Vandromme) and that, on the whole, the music fits in snugly with his better known repertoire. I find it entirely enchanting, love Alemán's voice, love listening to the disc and hope that it finds an audience beyond the normal Wandelweiser clientele.