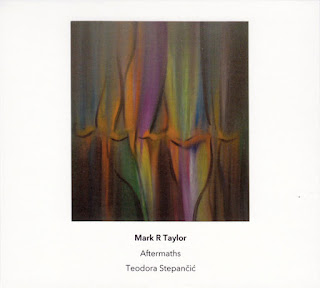 I might normally start off this review by noting that it's the first time I've encountered Taylor's music. This is, in fact, true but I'm guessing it's pretty much the case for everyone who hasn't personally encountered him as, to the extent one can rely on Discogs, this is his first recorded appearance in any guise, despite not being a newcomer (b. 1961). We have here a selection of 21 tracks--three "suites" of three, three and eight pieces and seven individual works, all performed by pianist Teodora Stepančić.

In the interview with Taylor on the label's website, he mentions the early influence of Howard Skempton and Hugh Shrapnel. I have to say that when I first heard 'For Alex Schady I', which opens the album, my only thought was, "Skempton!". Its slow, lovely, cautious chords, steadily played in the manner of a processional, strongly evoked certain piano works of the older composer. Now, this is no bad thing as far as I'm concerned, as I love Skempton's work. But it set the stage for the remainder of the program, which doesn't stray too far away from this model, mostly doing so with regard to variations in tempi from extremely slow (e.g., 'Lijn') to relatively spritely ('Aftermath Set Two'). As with other composers navigating this general area, I hear strong references to Satie's more "medieval" pieces, the Ogives and others, that sense of calmly walking inside an ancient church or other old structure, soft light entering, dust motes gently falling. It's, for me, a very attractive and alluring image and Taylor expands on it very ably, played with great touch and sensitivity by Stepančić. Each work is jewel-like, warm, somber but approachable and beguiling. If I have a quibble, it's that there's kind of too much of a good thing, too little variety in approach for so many pieces. Perhaps that's simply Taylor's comfort zone, though the interview hints at different tacks taken in the past. Perhaps Another Timbre will explore these in the future, providing a more rounded view of this composer. For now, this set is here to enjoy and it's eminently delectable.