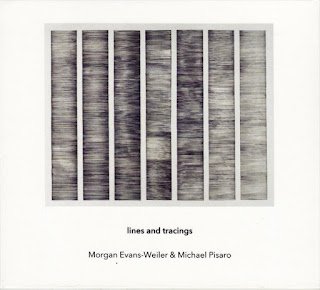 The Pisaro composition triggers two immediate responses in these ears. One is the tinge of Messiaen that hovers, especially in the poignant, thin violin lines that weave in and out like breaths hanging in frigid air. The other, no doubt influenced by the work's subtitle, is a sense of shifting grays, overlapping and meshing with the feeling of substances that were once liquid but have dried, like old washes of thin paint. In fact, some black and white paintings by Agnes Martin that I saw a few years ago came to mind, ones that aren't often reproduced. Searching just now, I didn't locate them but did see some pieces that looked remarkably like the cover image here. Checking further, I didn't see any credit listed for the image; I wouldn't be surprised if it is, indeed, a Martin. In any case, Pisaro's work maintains a certain kind of steady state throughout, soft lines, sometimes achingly melodic, emerging from the grainy mist formed by the electronics and other strings, as well as wonderfully deep respirations from the bass clarinet, in patterns that vary quite a bit though always retaining an overall character--more goes on than is apparent at first blush, an aspect I've always encountered with his best music. It's one of my favorite pieces in recent years from Pisaro.

While Evans-Weiler's title composition occupies a similar countryside, there are more than enough contrasts to make it an excellent companion piece. Perhaps enhanced by the presence of a harpsichord, the work possesses a stately mien, a really nice combination of stasis with a sense of forward motion, kind of like watching repeated film, from various angles, of the same group of people walking forward. Calm, soft tones, held for while with the exception of those from the harpsichord, gently overlap and ensue one another, generally tonal but with a dash of astringency, different instruments emerging to the fore, briefly, then receding, the whole in a delicate, thoughtful flux. Every so often the piano lays down a slow, deep pulse, providing vestiges of a spine, keeping matters from growing too diffuse. In fact, Evans-Weiler notes in the interview at the Another Timbre website that various written duo passages seep in and out of the hazier ones and that the players are given a fair amount of freedom--much credit to them. As in the Pisaro, the music succeeds in maintaining a kind of equilibrium while still preserving the sense of shifting change. A fine, absorbing piece.