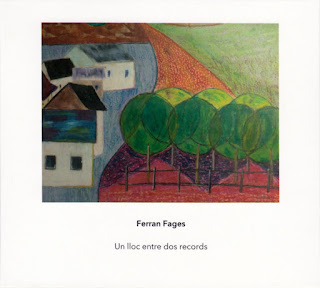 I've been listening to Fage's work pretty much since his first recordings (as part of Cremaster with Alfredo Costa Monteiro in 2002). His output ranges widely; I'm often surprised but have generally enjoyed the results. This piece, whose title translates to "a place between two memories", was conceived as part of a trilogy of works, one of which, 'Detuning series for guitar' was recently issued on Edition Wandelweiser. The third, 'What Might Occur' is based on re-readings of Feldman's 'Triadic Memories' and has not, to the best of my knowledge, been recorded. I had ambiguous feelings about the Wandelweiser, but will revisit it in light of this release and with reference to the fascinating interview with Fages on the Another Timbre site.

'Un lloc...' is a single piece, running almost 54 minutes. It begins with a plucked, six-note pattern on acoustic guitar, resonant and pensive, slightly reminiscent of a given stretch of Feldman piano music. Fages takes it through several subtle variations but after only a couple of minutes, the music begins to fragment and dissolve, reforming for a while, disintegrating again, reappearing in more isolated, fragmented form, splintered into high, muted pings now and then--all quite thoughtful, attractive and finely placed. Some twelve minutes in, all overt guitarisms evaporate and we're in a world of sine tones, soft, high-pitched, overlaid and quietly vibrant. This state of affairs lasts about twelve minutes more and is enchanting, otherworldly. For a bit over the final half of the work, Fages reverts to the guitar, at first overlapping with the sine tones, but occupying a somewhat less quasi-tonal area than was the case at the beginning. The notes, sometimes chords, sometimes single tones, are allowed to suspend and resonate, to float freely. One of the mental images I have, in fact, is of...things--dust motes, leaves, insects--floating in random fashion. Some passages again seem to refer to Feldman. The first time I listened, my sense was that this section went on too long, that it established what it wanted to do within the first few minutes and didn't elaborate enough on those findings to warrant the extra 20-25 minutes. Having listened several times more and having read Fages' thoughts on this release, I'm gradually mitigating that response; not entirely, perhaps, but little by little. I go back and forth. I hate to fall back on any kind of "mood" qualification, but can only honestly say that there are times when the music works fine, flows with its own logic and doesn't overstay its welcome and there are other times when I grow impatient. Maybe that's ok. In any event, I love hearing Fages' explorations, am heartened at the ideas he's tackling and look forward to following with him further down that odd path.

The most beautiful view is the one I share with you, the little things that make life beautiful. If you want give your thoughts on about marriages, beauty ,fashion and lifestyle share on write for us.

Marriage write for us

Such an interesting information. I always rate my paper to know level of it.

Wow, this illustration looks gorgeous and inspiring! You seem to have a real talent for drawing. Have you ever thought of posting it on Instagram, where a sufficiently large number of users can see and appreciate it? And in order for this to happen faster, you can buy instagram followers to increase their number.