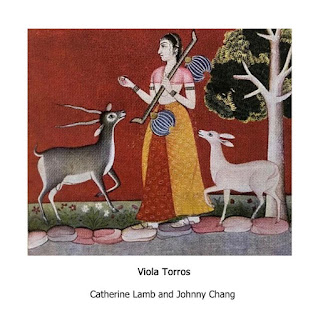 When I first glanced at this 2-disc set, I thought, "Ah, excellent! A composer of whom I've never heard, Viola Torros." A second look told me this was the title of the recording, not a composer. Ok, fine, especially considering how much I've enjoyed the work of both Lamb and Chang (who, let it be noted, play violas). The interview with the pair on the Another Timbre website, however, indicated that there was indeed such a composer as Torros and that fragments of her work were the seeds for the two pieces on Disc One here. Intrigued, I googled Torros and found nothing but references to this album, even when discounting words like "timbre", "lamb" and "chang". So, I'm guessing this is something of a charade, a fiction serving as an idea generator, a very attractive idea (obviously, I could be wrong).

Whatever the case, the result is about 150 minutes of stunning, deep and intelligent music. It's possible I'm being overly influenced by the wonderful cover image, but I find myself hearing the two pieces on Disc One, 'V.T. Augmentations II' and 'V.T. Augmentations III', as related to alap, the slow, improvised introductory sections of North Indian ragas. In addition to the violas, Bryan Eubanks provides "resonances" and each includes a trio of voices: Antoine Beuger, Yannick Guedon and Deborah Walker in the first, Rebecca Lane, Annie Garlid and Margareth Kammerer in the second. In 'II', the viola lines are rich, entwining each other, deeply melodic in a microtonal manner and consistently present, though one will drop out briefly now and then. Often, one is playing a lengthy line, the other a thoughtful, perhaps slightly mournful melody around that stem. The voices become apparent around midway through, softly accompanying the violas, very much a tinge in the space at first, before the strings drop out entirely (?) for a short moment. When they resume, the music drifts further into microtonality, becomes hazier--a thick, complex haze that, towards the piece's final few minutes, solidifies into a deep meditative sound with echoes of early music--fantastic. 'III' has many things in common with 'II' but plenty of differences as well. The general tonality strikes me as more overtly Indian, for one thing and there are many brief stoppages along the way, during which one can hear ambient sounds, including birds. It's just ravishing. Again, the voices emerge a bit after the halfway point, and fulfill a similar role though this time they carry, to these ears, more of an "angelic" aspect, light and high. It concludes on a very moving, long-held, tremulous note...with birds.

This would be more than enough, but Disc Two offers up two additional works, one each by Chang and Lamb, both spectacular. Chang's 'Citaric Melodies III'  is performed by the Suidobashi Chamber Ensemble (Wakana Ikeda, flute; Yoko Ikeda, violin; Masahika Okura, clarinet; Taku Sugimoto, electric guitar; Aya Tanaka, bassoon; Chang, viola; Samuel Dunscombe, bass clarinet; Michiko Ogawa, clarinet). Its core is a six note sequence (later morphed into four), a wistful, melancholy one that vaguely reminds me of Anthony Braxton's 'HM 421 (RTS) 47 (Composition No. 36)' as heard on 'Trio and Duet' (Sackville, 1974). This melody is iterated over and over but in blurred fashion, the instruments approximating both pitch and point of entry (I'm sure there's more to it than that, but that's a start). It's always close but distinct enough to create a shifting aura around the ensemble. Additionally, a certain kind of drama emerges, especially when lower tones seep in. The variations are imaginative, extremely well considered and endlessly fascinating--a great work.

Lamb's 'Prima Interius VI (for v.t.) is played by Chang (viola), Andrea Neumann (secondary rainbow synthesizer), Lamb (viola) and Derek Shirley (cello). A secondary rainbow synthesizer, I discovered, is a device developed by Eubanks "that spectrally filters a live sound input of the outer atmosphere to the listening space within which the the performance piece is situated." I take it that this is responsible for imbuing atmosphere of the recording with such a solid, plastic sense of air and space, within which the strings unspool languid, low keens, bracing and heartfelt. It begins sparsely enough, the strings limning clear lines with slightly gritty timbre, pausing now and then to appreciate the initially low level of ambiance. Gradually, the exterior makes itself known, first via vehicle engines, footsteps and barely heard conversations. More elements are introduced: a wavy, organ-like layer, more intense engine and vocal (loudspeaker?) sounds, an echoey ringing; all the while, the strings continue, resolute, tinged with mourning, beautiful. There's an ebb and flow between sources, the swaying lines always embedded in the larger room, the exterior sounds always allowing room for the strings. Each of the works on the second disc establish a setting and parameters and engage with them for a healthy duration, maintaining a certain constancy but always able to conjure forth wave after wave of exciting and moving music.