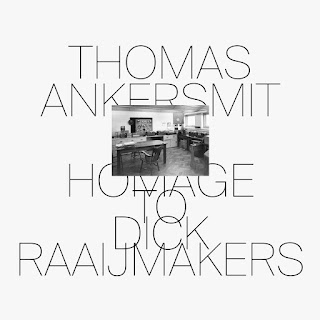 Back around 2000, in Boston, I fortuitously (maybe with some urging from Jon Abbey) purchased the Dick Raaijmakers boxed set of his complete tape music. European tape music of the 50s and 60s had always been an area that gave me some amount of trouble, largely due to what I perceived (and still do perceive, to some degree) as a kind of synthetic sameness, the aural Photoshop effect I get from many products emerging from the INA GRM scene, for example. Raaijmakers (1930 - 2014), along with others I've heard along the way, struck me as subtly apart from that sound-world; not entirely, but enough that I found much of it to be thrilling.

Ankersmit's piece, a single track of electronic music lasting over 34 minutes, traverses a wide expanse, making reference to Raaijmaker's art but very much carving its own path. In fact, I get something of a landscape feel despite the "unnaturalness" of the elements. It begins abruptly with a dense mix of disparate sounds, including sizzles, crackling rumbles, a steady, burred hum and a repeating horn-like tone, very much as if one had suddenly awoken in a busy environment, natural or man-made. This lasts about three minutes before subsiding then shifts to a subtly different zone of soft clicks, small eruptions of static and billowy, blurred explosions. Ankersmit's sound-world not only has great depth and varied textures but also entirely avoids that gloss mentioned above. The shifts have their own vague logic, the adjacent areas seeming somehow appropriately linked. Considering the vast range of sounds employed, from jagged to drones (albeit generally with a harsh edge, the latter sometimes recalling telephone busy signals), the degree to which the work hangs together is extremely impressive. Violent electrical storms emerge, settle into a disquieting calm (an amazing section some 23 minutes in with small bursts from a throbbing bed), gather strength for a renewed onslaught. The last seven or eight minutes are not so much quieter as more distant, as though watching explosions from afar, the hum from a nearby generator permeating the surroundings. It's like a slow, minutely detailed camera pan where one can't tell whether the vantage point is miles above the surface or microscopically among the earth and small organisms.

Ankersmit does a fine job in simultaneously offering an appreciative and imaginative homage to Raaijmakers while being entirely true to his own creative self. Needless to say, this is required listening for those who enjoyed the work of the late Dutch master. It's also one of the very finest releases I've heard from Ankersmit since first encountering his music back in 2001.

Wow ...just came across this ...so great to you have you back Brian...

Have you ever wondered if it's possible to hack things the way hackers do it in the movies.🤔🤔

"AS LONG AS IT'S TECHNOLOGY, IT CAN BE HACKED"


Hacking can easily be done by planting a computer virus or spyware(depending on what the hacker intend to do) in the targeted device.🤐🤐


We at THE HACK GEEKS give you the best hacking service there ever is.👌👌

We understand the Issues of scammers all over the internet and that's why we give you a solid prove of our services.


We have got the top hackers in hackerone.com that are always ready to hack for you anytime ,anywhere, any device, organisation, federal agencies, university, college you just think of it.

*To Sniff, Erase or Change a file in a Company, Organisation or in a Federal agency?📖📃

Eg: Changing of grades in a university.

Deleting of files such as criminal records and evidence.

Changing of files and evidence in federal facilities.

Stealing of files and document from companies and organizations.

*To hack an Email or any Social Media account?💞

*To Transfer funds without been detected?💴💵💷

*To increase your credit score?🔝🔝


All these are what we can do for you.


We are descrete and won't expose our service to you to anyone.

We look forward to hacking for you.

This has to be one of the most intelligent web contents I've come across in recent times. The style and delivery is similar to how we have the Celpip Exam Booking​ ​ that is changing lives right now.