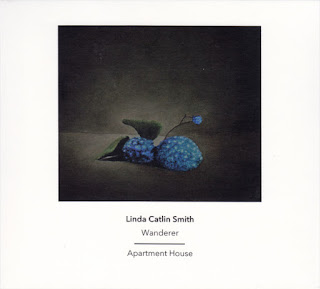 This is the third release of Linda Catlin Smith's music on Another Timbre, preceded by two wonderful recordings, 'Dirt Road' (2016) and 'Drifter' (2017). On 'Wanderer', yet another very fine entry into both her and the label's catalogue, we're presented with eight compositions, written from 1990 to 2010, and performed by Apartment House in various configurations ranging from solo to septet plus conductor.

While serenity and a sense of the rural (not necessarily pastoral) pervades Smith's work, the pieces here might not be as immediately ingratiating as those from the prior two albums which, as much as I enjoy those, might be a good thing, evincing an even greater range than I knew (my failing, no doubt). 'Morning Glory' begins with lovely, soft piano arpeggios (Philip Thomas), soon echoed by vibraphone (Simon Limbrick) but when the strings and reeds emerge (Mira Benjamin, violin; Anton Lukoszevieze, cello; Heather Roche, clarinet; Nancy Ruffer, flute; all conducted by Jack Sheen), a certain level of astringency is introduced, a chill breeze. As the piece progresses, it remains unsettling, balancing soothing lines with darker bumps and squiggles, ending in a somber, lushly umbral sequence. Thomas is heard solo on 'Music for John Cage', the earliest-written and shortest track, which begins as a kind of slowed-down processional, steady and light-filled, but ends with unanswered questions. A septet plus conductor (Chloe Abbott, trumpet; Benjamin; George Barton, percussion; Limbrick; James Opstad, double bass; Roche, Thomas and Sheen) tackle 'Stare at the River', the waterway hazy with fog. Long lines from bass and trumpet are offset with delicate cymbals, briefly tinging the piece with a jazz-like aura, perhaps enhanced by the clarinet. This segues into an almost hymn-like sequence atop which the piano plays spare but sparkling chords before eerily fading back into the haze. 'Knotted Silk', played by the same septet, is spikier, with sharp percussive strokes over strings and muted trumpet, burrs in a meadow.

'Sarabande' is a sextet with Benjamin, Limbrick, Lukoszevieze, Roche, Ruffer and Thomas (here on  harpsichord). A wafting, dreamy layer of reeds and strings is pricked by the keyboard, like a meandering yet stately dance that now and then slips into unison. Thomas is joined by pianist Philip Knoop for 'Velvet', another dark, probing work, initially recalling Satie from his Rosicrucian period, then floating skyward with a series of ethereal arpeggios, eventually settling gracefully and comfortably to ground--a wonderful piece. The title work, for a quintet of violin, percussion, cello, clarinet and piano also navigates an uncertain terrain, the piano stepping carefully through a skein of quavering lines, tiny bursts of cymbals and deep, soft drums. Finally, there's 'Light and Water', an enchanting vibraphone/cello duet, not negating the preceding uncertainties entirely, but offering some amount of solace, the lowed, bowed cello tones laying to bed the clear, steady vibes before raising their own questions.

A captivating set of very thoughtful compositions, rigorously and empathetically performed by members of Apartment House.

This website online is known as a stroll-by way of for all the information you needed about this and didn’t know who to ask. Glimpse right here, and you’ll undoubtedly discover it. online casinos for us players