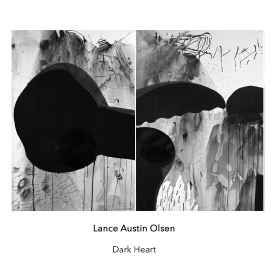 Olsen was originally a visual artist and has continued to produce a vast amount of paintings and drawings, some of which have adorned the covers of other Another Timbre releases (it's well worth reading the excellent interview with him at the Another Timbre site for a career overview). So it's not surprising that three of the four works presented here derive from graphic scores, one by Olsen (heard in two realizations) and one by Venezuelan musician Gil Sansón.

'Theseus' Breath' is the piece heard twice, both times by a quartet, each almost ten minutes in duration. The first, interpreted by four members of Apartment House (Mira Benjamin, violin; John Lely, electronics; Simon Limbrick, percussion; Anton Lukoszevieze, cello), is a rough and stormy affair, the strings grating and grumbling, the percussion wooden and clattery, the electronics burbling with a menacing air. One envisions a minotaur lurking on the other side of the maze wall. The range of colors  and tones evoked by the quartet are a fine analogue for those seen in Olsen's visual art, for instance that seen on the cover (although an interior image shares the title--perhaps it's the score?). The second version, quite different, is realized by Ryoko Ajama (turntable, melodica), Patrick Farmer (paper, card), Isaiah Ceccarelli (reed organ, percussion) and Katelyn Clark (organetto). While still creating an unsettling aura, there are more held tones via the organs and melodica. This yields an open, if foggy, environment populated by odd chirps, whistles and skittering sounds, that slowly evaporates; very lovely and mysterious, especially the last several minutes.

The source material for the title track derived from recordings sent to Olsen by Norwegian guitarist Terje Paulsen, consisting of both guitar shards and field recordings. Olsen began working with the material in 2013, let it be for a few years, then picked it up again in 2016 to rework it, by that time no longer able to always distinguish between Paulsen's original contributions and his own. The quality of the guitar sounds--liquid, bulbous, globular--makes for a unique element in Olsen's sound world. There's an interesting break after about five minutes at which point one may have been satisfied. When the sounds return, however, we hear piece of old radio theater: Dragnet, if I'm not mistaken. These disembodied voices weave their way through a morass of whines, echoing clangs, deep guitar scratchings, etc. For all the variety of landscape, it strikes me as somewhat steady state, a dark vision of an endless alley. I'm not sure it quite holds together for its length (32 minutes), but it's an gripping enough ride.

A Meditation on the History of Painting' is another story. Along with another work from this Canadian Composers series, Cassandra Miller's 'Duet for Cello and Orchestra', it's one of the single most impressive and absorbing pieces of music I've heard in years. Gil Sansón's graphic score begins with some very loose directions, for instance, "Some sounds can be related to painting, or not" and "Gestures can be smears or can be calligraphic". The images on the 12-page score are a complex sequence of clipped texts (including numerous cash register receipts, laid horizontally, puzzle pieces and, most prominently, smears of paint, from streaked and, frankly, fecal looking to saturated swathes of color): 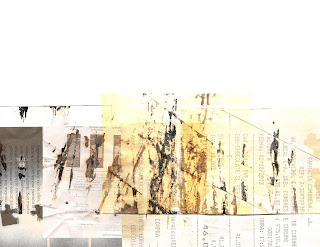 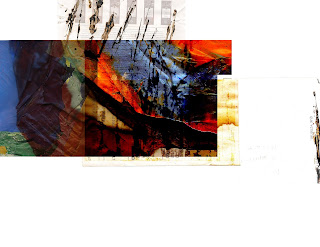 Olsen, wielding field recordings, amplified copper plate and engraving tools, amplified iron park bench, found recording (wax cylinder), guitar and voice, traces his way through, beginning with exterior sounds, cars and trucks on a wet road, maybe, some chimes, wooden clatter as from a balafon, the noises welling into a large wave, fading after some six minutes and shifting into another world. Here, velvety ringing tones circulate dreamily, their wafting overlaid by what sounds like a sharp instrument tearing through cardboard--it's an intensely sensual juxtaposition, just fantastic. A men's choir emerges (the wax cylinder, I take it), subaqueous and quavering. The scene shifts again, guitar plucking amidst hums and harsher buzzes, sparks and clacks, a slow-motion seesaw. Male voices, vaguely distorted in one way or another, appear in snipped fragments. The volume heightens, the elements acquiring more tension, a disturbing rattle skims back and forth across the stereo spectrum. Finally, a last, quick scratch, like a struck match. Difficult to describe, wondrous to experience.

Yet another very fine entrant in this series, highly recommended.