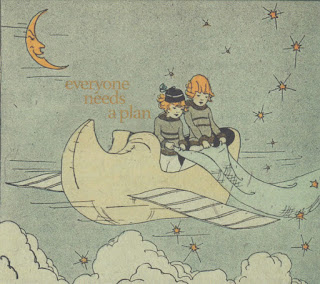 Even without the Wynken, Blynken and Nod imagery that graces the cover and the other five panels of the CD package, any listener would be struck by the dreamlike nature of this release, though not so much in structural sense. The single track, running some 75 minutes, is a kind of steady-state construction in that its overall aspect is roughly the same throughout even as the interior details bristle and mutate. It's like a large, think slab of material, the outline defined, the stuff of it chaotic, oneiric.

There are several constants: the voices of Revert and Rossetto primarily. They're never conversing as such (natural enough given their half-world spatial separation in real life, although the illustration on the disc itself implies ears connected by wires), more like words and phrases passing each other in the ether. Sometimes, it sounds like they're reading, other times perhaps one side of a phone conversation, first separated, eventually overlaid into an all but incomprehensible density, isolated words emerging from the crowded eddy of sound. If there's any slight reference one might have to previous sound-work, it could be Robert Ashley's great 'Automatic Writing', but pretty much only in the sense of (sometimes) indistinct language embedded in a larger flux. There's also, often, a kind of electric guitar tone, fairly consonant, that weaves in and out, providing a fluid kind of spine. As dense as it becomes, the sound-world is never particularly harsh, never thin or attenuated, always thick and rich, a sweet stew. Crucially, it's never overcrowded; there's a great deal going on but the sense of depth imparted allows the events to be heard as receding from one's immediate plane, occupying  space at some distance from the listener.

How else to describe this? The music very slowly intensifies as it flows along, the words and phrases are both personal and serious; Rossetto, for instance, talking about recent writing, laughing self-consciously, saying, "I try to tell  you everything", "I've had things happen to me", etc. But these are all just elements of an overall stream. It's like trying to describe a swirl of cream in a cup of coffee. At the end, multiple voices entwine around themselves, unaccompanied, finally thanking each other.