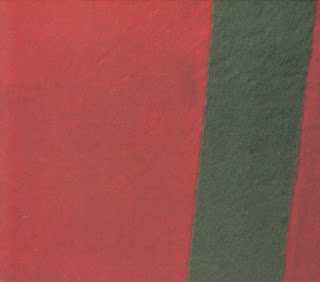 Lucio Capece/Marc Baron - My Trust In You (Erstwhile)

This is the first appearance of either musician on the Erstwhile label, and, at least as far as this listener is concerned, the results are a little surprising (and excellent). I'd admit that in Baron's case, "surprise" shouldn't really be an option as the relatively small number of prior releases under his name certainly gave one little reason to expect this or that general approach--they varied quite widely. Capece's sets, in recent years at least, on record and in concert (I've been fortunate to witness events of his in both Paris and Sokołowsko, Poland) have often (not always) been very quiet affairs, both in acoustic contexts (on bass clarinet and other reeds) and with regard to his floating speaker installations. So there were at least a couple of aspects of 'My Trust In You' that were a little surprising: one is the relatively aggressive nature of many of the constructions and, secondly, how often (if subtly) drones or pulses were present.

Seven tracks, Baron credited with tapes, field recordings and various analog devices while Capece wields a vast array: bass clarinet, slide saxophone, analog synth and filter, drum machines, double looper, equalizers in feedback, regular and telephone field recordings, mini speakers in movement, the latter I take to be his airborne mini-speakers. It begins abruptly with stark vividness ('Believe in Brutus'; the recording is replete with odd track titles), recalling 60s-70s tape collage music, but with massive depth and shifts of focus, from distorted radio transmissions to mumbled (looped) verbiage to colorful swatches of synthetic tone. It's dizzying, very in-your-face like a slap, bracing. With 'Black soils - museum without statues', we seem to enter a Lambkinesque world, murky, with iterated, cyclic sounds (noise), slurred words. Midway through, beneath thin cymbals, a grimy drone emerges briefly, is swallowed by electronic flutters,  dissipating into a raft of clicks and clatters--then chaos ensues with much louder cymbals, backward tape, loud yet distortedly muted chimes and more. Very complex, extremely immersive. But things shift to a rather more approachable form in the following cut, 'Self-centered interpretation of', where we enter a relatively calm but still simmering soundscape that sounds like something Fennesz might have come up with had he stayed on track--sandy drones, multiply-layered horns--while the ensuing piece rotates around an intense, mechanical rhythm (or two superimposed), before splintering into a public space with footsteps and hazy voices. Different rhythms appear, rapid and flickering, with high-pitched squeals. Given the presence of elements such as the pulses and extended tones, the works are reasonably approachable; probably one of the better recent Erstwhiles to proffer to someone interested in dipping his/her toe into the general vicinity. The remaining tracks branch out further, though really always maintaining more than enough fabric to pull the listener along, to sustain a thick undergirding of sound--no silences to be found here, just surge (nonstop in 'Snowblind', until an odd, loopy gunshot-laden conclusion).

A wild ride, not what I expected but eminently worthwhile, a very fine addition to the catalogs of both Capece and Baron. Hop in.