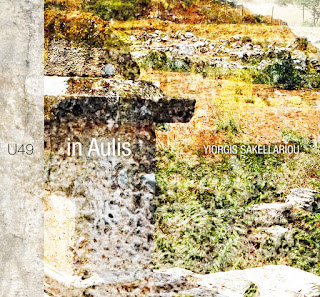 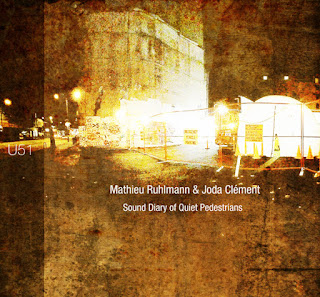 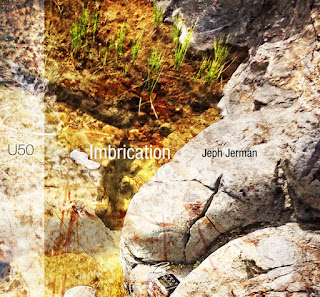 Since 2009, Daniel Crokaert's Unfathomless label has been releasing music that, by and large, revolves around the nexus of field recordings and electronics. In one sense, you're pretty sure of the general area to be explored when first slipping a new disc into the player. In another, he and the musicians tend to do an excellent job of exploring the vast amount of potential variation within such apparently restricted environs.

Yiorgis Sakellariou brought Aeolian harps to the site of the Greek temple of Artemis in Aulis, Greece, recording (and, I assume post-producing) their interaction with the wind, in the process picking up other ancillary sounds. That contrast, between the wooly, whistling, windborne atmospherics and the rougher (though always blurred) booms and bangs, forms the basic structure of the 43-minute piece. But there's much more, many shifts in focus and mood, from quiet contemplation replete with crickets to dully roaring, grinding, somewhat threatening cycles ending with a sharp crash of glass. Subsidence, resurgence in different guise; there's a wavelike effect throughout, relatively clear or detritus-filled, a fine combination of the natural and manmade. A very well thought-out effort, overall.

Canadians Ruhlmann and Clément constructed the four pieces that comprise their "diary" in Vancouver. A photo in the accompanying sleeve shows the pair on a beach, but there's something vaguely industrial about the sound-world created here, a hint of ozone in the air. At the beginning of 'Crook of Land', deep thrums are offset by a distant buoy (?), steamy hisses and bell after-tones. 'Gore and Hastings', the longest track, is very expansive, unfurling in a multilayered array of burred, marbled sounds before migrating to harsher tones that recall bowed cymbals, then sputtering, returning to a harborlike area with softly booming foghorns and urban hums. The anxiety level ratchets up a bit on 'Point-No-Point', with higher pitched, keening whines set against (again, faraway) machinery clanks and groans; a very strong track. The  disturbingly titled, 'Middle Arm' extends this mood, a kind of inky, billowing darkness emerging, swallowing the bay. Excellent work, fine soundcraft.

I think I've only heard one thing from Jerman in the last few years ('Matterings', his collaboration with Tim Barnes on Erstwhile) and prior to that, nothing since around 2010, though I have plenty from the oughts. Even so, 'Imbrications' (yes, I had to look it up: the overlapping of edges, as in tiles or scales) fits in very well with my previous Jerman-ic listening. Recorded at various sites that seem to cluster around the American West, it begins with a long section of dry objects rubbed, rustled and otherwise gently assaulted. As ever, Jerman possesses an uncanny sensitivity and sensibility in his choice of objects, touch and sound placement, something very "natural" but also quick and unhesitant. An interlude of booming noises, sounding as though he's smacking the edge of his fist against an empty oil drum briefly shifts the focus, before the raspy shaking and rattling resumes. There seem to be machines or rotating devices in play, recalling the shaking tables used in his fantastic 'Lithiary' (Fargone, 2005) and the work closes with echoes of that, what sounds like marbles being rolled around the top of a rough, circular surface. Jerman is wonderful at extracting a nearly infinite amount of sounds and layers from the most basic of substances. He does so once again, here.