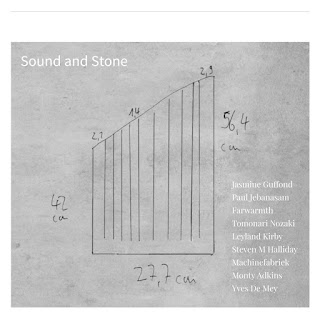 Sound stones are sonic sculptures created by the father-son team of Klaus and Hannes Fessmann (you can learn more about them via this You Tube video.  This recording, I believe the first on the composer-built imprint, collects interactions between the stones and nine musicians. The stones themselves, wetted and played by rubbing with one's fingers and hands (possibly bowed and/or struck as well?), produce a range of ringing tones, sometimes with a pleasing roughness to them, other times more pure--depending on the instrument used, the tones, their pitch range, etc. varies. But generally speaking, we're in drone territory, sometimes augmented by electronics. Depending on how they're handled, they can lend themselves to music that's a bit too close to Eno-esque New Age for my taste (Farwarmth) or wonderfully dark and ominous (Machinefabriek, aka Rutger Zuydervelt). I'd also single out Monty Adkins' contribution for special praise. Most of the the others fall somwehere between these poles, always enjoyable and compact (playing times in the five minute range) with greater or lesser graininess, not too distant from what listeners may have experienced via labels like Unfathomless. You can hear for yourself at the bandcamp link below. 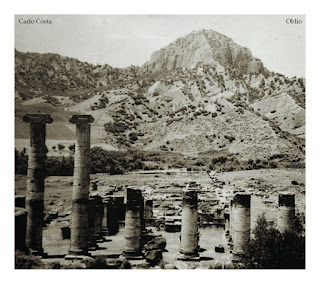 A solo percussion effort from Costa, two long pieces and expertly handled. 'I' is expansive, flowing and very well-paced, keeping on the quiet side of things while patiently exploring a vast array of instruments large and small. Costa constructs a convincing landscape, entirely without pyrotechnics, maintaining interest with both delicacy and urgency. 'II' employs wood blocks, high-pitched bells and some swirling, metallic based attacks, more structured (though loosely enough), recalling to some extent the late Jerome Cooper's brilliants solo concerts. It "decomposes" into a section of harsher rubbing, somehow melancholy, drifting into plaintive moans. Very good work, well worth a listen when it releases on November 6.