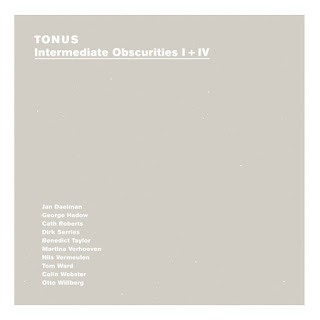 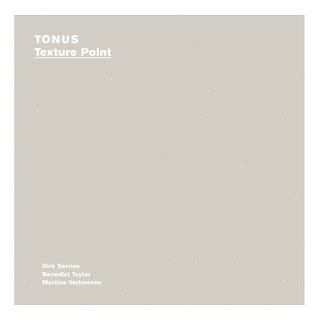 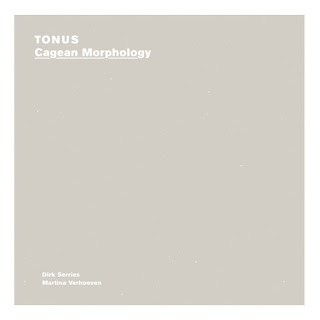 Tonus - Intermediate Obscurities I +  IV (A New Wave in Jazz)

Ok, the label name is unfortunate. The three items above are the first I've heard from this imprint and, as it happens, the music has little to do with jazz, though I take it from looking through the label's catalog that prior releases do.

Tonus seems to be a project of guitarist Dirk Serries, the personnel varying from album to album, in these cases from duo to trio to two sets of sextets. 'Intermediate Obscurities I + IV' is a two-disc release, performed by those sextets. On 'I', listed as being "based on a leitmotif by Martina Verhoeven', the ensemble has a superficial jazz-like aspect: Jan Daelman, flute; George Hadow, drums; Serries, acoustic guitar; Verhoeven, piano; Nils Vermeulen, double bass; Colin Webster, alto saxophone. If I were searching for any quasi jazz-related music to compare with this 58-minute work, recorded live, maybe I'd go with some of the sparer Roscoe Mitchell. Carefully composed, softly played longish lines overlap in ever-changing patterns, the tones ranging from clear to harmonics-laden (especially the arco bass, sometimes the alto). The flute and alto tend toward the higher registers, never harsh, the percussion arhythmic and sparsely colorful, the piano and guitar injecting slightly acidic chords as needed. The basic character and approach is maintained throughout but the interior details are constantly shifting. It only moves internally, but that movement and the choices made are engrossing.

'IV', a graphic score by Serries, utilizes an ensemble with Cath Roberts, baritone saxophone; Serries, Acoustic guitar; Benedict Taylor, viola; Tom Ward, bass clarinet; Webster, alto saxophone; and Otto Willberg, double bass. There are certain similarities with the previous work: a single piece, here about 45-minutes long, remaining in more or less the same territory for its duration, the instruments playing longish, overlapping tones. But, perhaps via the instrumentation, it's pitched lower, darker and, to no small degree, more sumptuously. When the baritone, alto (played low) and bass clarinet combine in complex harmonies, the effect is quite luxurious. There are also occasions where the intensity level surges, though not for long. Some listeners might consider the two pieces overly akin. I don't have that problem at all and hear them as related, but entirely distinct and very absorbing entities.

'Texture Point' presents four tracks, performed by Serries (acoustic guitar), Verhoeven  (piano) and Taylor (viola). There's no indication of compositional credit given here, so I'm guessing the pieces are improvised (Guy Peters, in his liner notes--he also wrote them for the other two releases--is a little defensive here, as though writing for listeners unused to this atmosphere), though the three "textural" pieces are indeed that while the single pointillistic one lives up to its title. 'Texture I' offsets deep notes from the piano, lending the music a darkly romantic, even gothic aura, with mid-range, rich plucks from the guitar, both sliding alongside rougher scratching, bowing and rubbing from the viola. 'Textures  II' is more vibrant, the piano crystalline, though the viola is more somber, with low, wailing laments. The pointedness of "Point A" resides in the piano and, especially, the guitar--the viola casting skittering harmonics that swirl around the two more stationary sound emitters, the music growing harsher as it progresses. Finally, 'Texture III', returns to the rich bleakness, both the guitar and piano plucking dry tones against sustained, darkly questioning, isolated piano tones. A very impressive recording.

The third release, 'Cagean  Morphology', is a duo with Serries and Verhoeven, a single 34-minute piece. Again improvised, this is easily the sparest of the three offerings, the single, ringing tones of the instruments allowed to hang and decay, leaving much silence. One picks up the likely influence of the Wandelweiser school here. As with the previous works, the music remains consistently within one "space" throughout and, again, manages to offer patterns, exceedingly slow as they are, that subtly vary, more than maintaining the listener's interest. Toward the end, the piano hits several high, brilliant notes while the guitar answers with more hesitant, wavering ones--very lovely.

All three recordings carry a fine quality of perseverance, of sustaining an idea over a long time, closely investigating aspects encountered, a favorite approach of mine. Highly recommended.