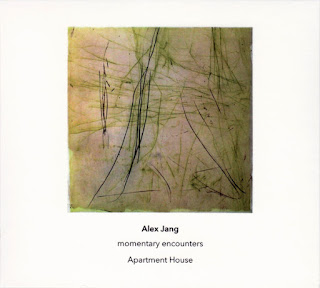 I believe this is the first physical release from Jang, a Victoria, Canada-based composer (the recording is part  of Another Timbre's Canadian Composer Series). It presents four subtle, delicate works, three performed by members of Apartment House and one by the Chilean guitarist, Cristián Alvear.

'momentary encounters (5)' is a lovely piece, played in an exterior environment (Tooting Bec Common, South London) by clarinetist Heather Roche. It's an idea that's been in play for a while but this performance is exceptionally strong. I gather that the instrumentalist doesn't make a "scene" of herself, simply sits and plays in a public space, any intervening noises--truck engines, barking dogs, yelling kids, birds, etc.--occurring more or less without knowledge of her presence. The music is soft and serene--long, hollow tones that easily weave in amongst the environs, tinging them gently. The whole piece evokes a calm, observant state of mind, natural and unforced. Interested listeners may like to hear another version, recorded recently outside of Cafe Oto, London prior to a performance of Jang's music inside. Here, a loud conversation "interrupts" the playing, though whether or not the speakers were aware of Roche's presence is open to question. Either way, it casts the piece in a different and, for me, intriguing light.

The remaining three works are studio recordings. The instrumentation in 'any three players' (here, John Lely, melodica; Simon Limbrick, vibraphone; Anton Lukoszevieze, cello) might remind one of Christian Wolff and the music does as well, at least a bit, with quiet, near-melodic lines slowly dancing about each other, paths interweaving but rarely colliding. It meanders, but I have the sense that's the purpose--slowly wandering, seeing what happens; very satisfying. Alvear performs, solo, 'a gray, bent interior horizon', a sparser work. Slightly muffled notes are plucked at a slow pace, sometimes in regular sequence, sometimes with varied density. It's a fragile piece and I'm not sure there's quite enough there to hold up for its ten minutes, but thoughtful nonetheless; I'd be curious to hear it out in the world, as in the first work. The final track. 'distributed tourism', is played by a quintet (Mira Benjamin, violin; Limbrick, vibraphone; Roche, clarinet; Nancy Ruffer, flute; Lukoszevieze, cello). It's more a clearly composed work than the trio, with overlapping lines, harmonies and somewhat less vague melodic material. And it's gorgeous. Again, an amble is what I think of but here, instead of three walkers on their own (in a common space), there's some teamwork, some mutually agreed upon points of interest and convergence. As with all the music on this disc, the atmosphere is quiet, unassuming but alive with intelligence and perspicacity. Its a 25-minute stroll, well-paced, deftly colored and subtly structured: a joy.