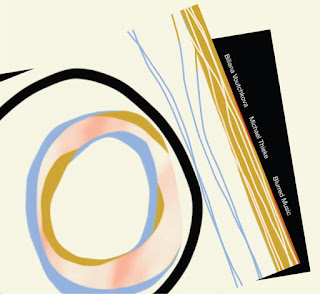 'Blurred Music' is technically the first recording from Yuko Zama's very exciting new Elsewhere label. I wrote earlier about Melaine Dalibert's release, the second in the imprint's early catalog; it was a single disc and, for me, easier (in one sense, anyway) to grasp. Here we have three CDs, three live recordings from within the space of nine days in December, 2016, each with its own complex character. I found it tougher to grapple with but, ultimately, just as rewarding.

I've known and greatly admired Thieke's clarinet playing and composing for some time now, particularly as involved The International Nothing, his clarinet duo with Kai Fagaschinski, and The Magic I.D. with Fagaschinski, Christof Kurzmann and Margareth Kammerer. I was much less familiar with Voutchkova's violin work, though what I had heard led me to "place" her more in the jazz-based free improv camp rather than the quieter, smoother territories often investigated by Thieke, so I was curious and even tentative about this combination. It was only belatedly that I realized I actually possessed an earlier collaboration, 'Already There' on Flexion (2013), which I enjoyed a great deal at the time; the problem with hearing too much music: one forgets things one shouldn't--need to revisit it.

In any case, I came into this with notions both accurate and false. The methodology used here is fascinating. There's a base of pre-taped material. The duo sometimes attempts to duplicate these sounds (the "blurred" aspect arising upon the inevitable failure to do so precisely) and sometimes improvises along with/atop it. There's more to it than that and I may not be understanding it completely. The at-home listener, however, can only rarely distinguish between the taped and live sounds, so experiences the music as a two violin, two clarinet quartet. The first portion of Chicago is rather active, even frenetic, tending more toward the kind of movement I'd associated with Voutchkova--very gestural and virtuosic, with Thieke (unusually, in my experience) following suit, his clarinet a-bubble and not above the occasional shriek. But soon enough, the music splays out into thick, taffy-like lines, slowly settling into various lovely forms of stasis, then spinning out once more into a soft but energetic space with spit-out breath sounds and quietly strangulated vocals and pizzicato attacks. There's more of this kind of back and forth on the first disc, 'Chicago', than on the others and for my taste, the music works better the less raucous it is, but that's perhaps more on a micro-level. Listened to as a whole--a more difficult task, more so over three discs--it fits in quite well as a "chapter".

'Philadelphia' picks up, a week later, where 'Chicago' left off. In fact, I found myself wondering if the underlying tape might be one long session, returned to at the point which the previous concert ended. I've been remiss in remarking how simply gorgeous the meld of violin and clarinet (or two violins and two clarinets) is. That's brought home near the beginning of this set, the strands intertwining licorice-like, creaminess and grit, so great to wallow in. After my first listen-through, I had the impression that 'Chicago' was the most active and intense section, but I was over-simplifying. There's plenty of intensity on hand in Philly. For just one example, there's a portion that begins some 25 minutes in that's like being among a set of buzzsaws--pretty spectacular, ultra-intense music. Even the quieter moments are somewhat harrowing.

The New York set, recorded at Phill Niblock's Experimental Intermedia loft, runs to 70 minutes, a good deal longer than the prior two (about 50 and 40 minutes, respectively). Part of my fascination with this release is the embedding of three fairly long sets into one (as I hear it) extremely long one. This begins with layers of extended tones, the kind of laminal approach that I find very satisfying, allowing the listener to directly experience variations in pitch and timbre and construct relationships for himself. They slowly dissolve into a kind of warbling keen, pitched high, birdlike, before tilting back into relative consonance, where it lingers for a delightfully long while, fluctuating and quavering. Midway through, there's a quiet nest of pizzicatos and muted squeaks and breath tones. Here, and later as things quiet down even further, the integration of the tape with the live performance is utterly seamless. The set is perfectly paced, always riveting, concluding with hazy, uncertain lines that point toward future music.

A really fine, complex and unusual release, and a superb initial outing for Elsewhere.

Have you ever wondered if it's possible to hack things the way hackers do it in the movies.🤔🤔

"AS LONG AS IT'S TECHNOLOGY, IT CAN BE HACKED"


Hacking can easily be done by planting a computer virus or spyware(depending on what the hacker intend to do) in the targeted device.🤐🤐


We at THE HACK GEEKS give you the best hacking service there ever is.👌👌

We understand the Issues of scammers all over the internet and that's why we give you a solid prove of our services.


We have got the top hackers in hackerone.com that are always ready to hack for you anytime ,anywhere, any device, organisation, federal agencies, university, college you just think of it.

*To Sniff, Erase or Change a file in a Company, Organisation or in a Federal agency?📖📃

Eg: Changing of grades in a university.

Deleting of files such as criminal records and evidence.

Changing of files and evidence in federal facilities.

Stealing of files and document from companies and organizations.

*To hack an Email or any Social Media account?💞

*To Transfer funds without been detected?💴💵💷

*To increase your credit score?🔝🔝


All these are what we can do for you.


We are descrete and won't expose our service to you to anyone.

We look forward to hacking for you.