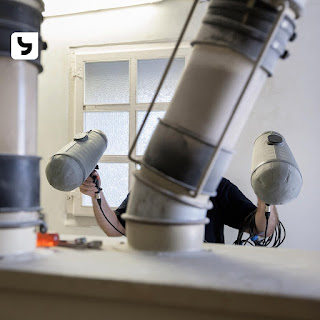 I'd always greatly enjoyed Samartzis' music since first hearing him, if I recall correctly, on the duo recording with Sachiko M, 'Artefact', released in 2002. But I was only able to meet him and hear his work live (that is, on tape) several years ago in Paris at IRCAM. My experiences with the French academic electro-acoustic world wasn't so great--the programs and synthesized sounds tended to resemble a musical version of Photoshop as far as I was concerned, projecting a kind of sheen over almost all compositions that I found unappetizing. At the event in question, however, two pieces stood out: those of Giuseppe Ielasi  and Samartzis, which featured sounds that were very alive, very sharp and full of grain. 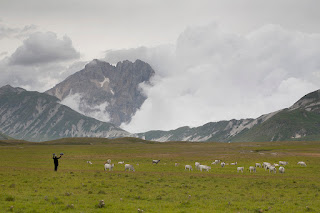 This recording is very much in that lineage. It was recorded during a residency in Abruzzi, Italy, Samartzis accompanied to various locations by d'Arielli, who contributes 24 photographs that arrive with the download, in addition to an essay by Samartzis on Futurism, Marinetti and the dynamism of the sounds heard in the countryside and urban settings. Seven tracks, the title of each indicating either a place or condition (each prefaced and occasionally interrupted by a female voice, presumably d'Arielli's, offering a one-word description on Italian). As with the work I heard at IRCAM, which involved sounds recorded on a ship near Antarctica, Samartzis seems to allow the sounds to speak for themselves: cowbells, wheat fields in the wind, threshing machines, grain processing, insects, water dripping, pasta being formed and cut, planes in the night, etc. (most of these documented in the photos). But I'm reasonably sure that all this hyper-verisimilitude was arrived at via ultra-subtle and careful manipulation of his initial recordings. That they appear so enveloping and of the place, unladen with any over-obvious irony or or other artifice is fine testimony to Samartzis' vision and abilities. How an Italian meal arrives at the table Excellent, discreetly imaginative and engaging work. 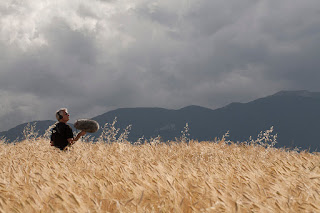