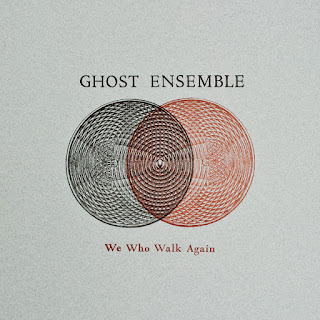 The Macklay piece, inspired by kaleidoscope patterns, oscillates between brief, rhythmically oriented kernels and somewhat stretched-out sequences, the tones in the latter engagingly sour, especially the multiphonics and microtones from the oboe. There's a certain wry playfulness to it--at times it reminded me of a calliope--and an interesting mix of modern techniques within a structure that retains an amount of classicalness. It might fit comfortably into a Bang On a Can program, but it's better than that. Olivero's 'Angels & Demons' is a text score, asking the ensemble to evoke "collective guardian spirits' (angels) and "individual spirits of creative genius" (demons). At a concert venue, I'd likely begin twitching uncomfortably in my seat upon reading this, but the members of Ghost Ensemble pull it off without any undue new-age-ishness. Low, growling bass attacks help ground the long, floating lines above; soil and mist. Very fine ensemble playing--excellent listening to one another.

The Richter work occupies Side B. A cloudy, mysterious and dark opening, low rumbles and moans with the odd sharp glint through the shadows. It throbs, pulsates, moves inch by inch, Beckettian in its slow spread. Some wonderful tonalities are generated in the shifting lines of varying lengths, the interplay of those deep tones with the soft plucking of the harp and an occasional hesitant but steady, dull beat of a drum. Matters begin to coalesce toward the end, dense lines forming, surging off into the hazy dark, perhaps offering just a bit more direction than was apparent at the start; not a light at the end of a tunnel, but maybe the faintest of glimmers. A very strong piece, my favorite on this recoding.

Very good work all around, certainly a group to keep an eye on.