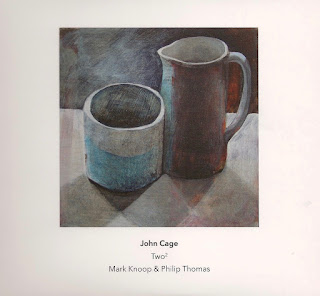 Of Cage's so-called "Number Pieces", works composed late in his life, 'Two2' (1989) seems to be one of the least frequently recorded. It was written for the piano duo Double Edge (Edmund Niemann and Nurit Tilles) though it appears that the premiere was performed in May 1990 by Rob Haskins and Louis Goldstein; it's available to be heard on YouTube. That performance lasts just over an hour and twenty-five minutes and the two others I can locate, by Josef Christof/Stefan Schleiermacher (released on MDG in 2000, as part of the 'Complete Piano Music', volume 5) and a live video by Beata Pincetic and Christos Sakellaridis last just over 46 and 36 minutes respectively.

On the johncage.org website, the piece is described as follows:

This is one of Cage’s few “number” pieces that does not utilize time-brackets. Being inspired by  a remark of Sofia Gubaidulina, i.e. "There is an inner clock," Cage created a composition consisting of 36 lines of music, each containing 5 measures. Within each line, 31 events occur: 5+7+5+7+7, as in Japanese Renga poetry. The pianists play a measure in their own tempo, but the next measure may only be played when both have completed the previous.

Philip Thomas, in an interview published on the Another Timbre site and partially reproduced in the sleeve of this release, mentions having heard the piece both in live performance and on recording, remarking, "...it just didn't draw me in in the way that most of Cage's number pieces do. To my ears there were too many notes, too much material in the piece such that I quickly lost interest." But reading the score himself and calculating what he thought was an appropriate amount of time to spend on each measure, he arrived at a potential duration of around two and a half hours. The current recording clocks in at just short of two hours and eight minutes. Thomas remarks, "There are no instructions about duration, so any and all durations are possible and valid, but I think that taking it at the pace we do at least brings a different perspective to it, and reveals other things about the piece that I'd not heard before". 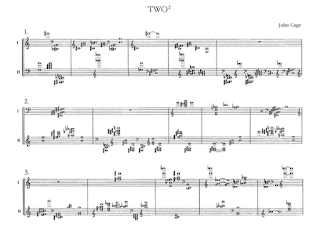 Having listened to the three other versions, online, I have to say that, as generally enjoyable as those are to my ears, Thomas' intuition is exactly correct. The sense of pace is almost viscous without any connotations of stickiness or anything syrupy. If you can imagine very slowly flowing water, that's close. Maybe cold lava. Notes suspend in the air for a few moments, then softly fall and disappear. My impression is that there's more in the mid- and mid-low range of the piano than elsewhere, a real roundness in the tonality, a thickness. The sequences have something of a darkly Romantic character, as though extracted from a larger work, slowed way down, carefully examined and considered. As in Feldman, there's somehow a sense of forward progression though never the slightest indication of a goal. For what it's worth, I never get the impression of two pianists, just one strong, coursing river of music. It's 128 minutes of pure, thought-compelling, perception-enhancing, down to earth bliss. Can't ask for more.