Using a loaded title like "History of Violence" (and, presumably, not referring to the Cronenberg film of almost the same name), one expects to hear som eallusions to the subject but, if they're here, I have difficulty ascertaining any. Not so important, I guess, but the field recordings captured and massaged by Sulidae Belanglo State Forest in New South Wales, Australia don't directly refer to anything violent. One assumes the violence in question is more general, that is, damage to the flora and fauna of the area at the hands of humans. The sounds seem to have, generally, natural origins, from the opening mosquito-like whines of "Bargo" through the requisite swarms, chirps, etc., most enswathed in a kind of sonic cloud that gives the affair a muted, blurred aspect which I imagine is the intended effect but that makes much of the work somewhat indistinguishable from other field recordings of the "natural" world. "Slow dusk near long acre fire trail" seems to contain phonograph noise, maybe an ironic commentary on the wildlife sounds around it, or captured on it? By itself, this track is the one I found most moving, that and the moment near the end of the title track when muffled voices emerge from the blur. 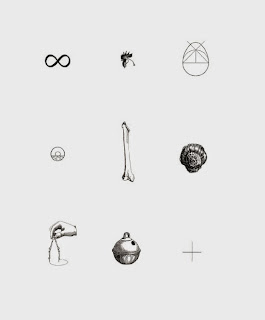 A 3" disc accompanied by a booklet containing poetic text and illustrations. It's a very personal document, including the music, even as it's made up of three skeins of grainy electronics: a short, loud burst that peters out in seconds, a few minutes of steamier, damper sound, as of a large, interior generator of some kind, and ten or so minutes of a more grinding, dirty sound, reminiscent of a large device in need of oil. Abstract but strangely intimate, no more, no less. the poems (in Greek typescript as well as English) seem to similarly straddle some border between distanced and closely felt, for example: Light that spills/and rhythmically emits odors of milk/with the voice of steam locomotive engines. The five ink paintings are like personal signs or totems, again quite inward looking, bearing an aura of meaning all but unknowable to the viewer. Very interesting and, ultimately, strangely alluring work.