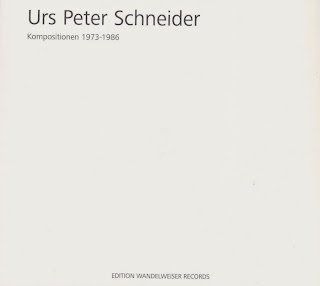 The structure of this 2-disc set is durationally symmetrical, four pieces lasting (more or less) 8, 60, 60 and 8 minutes. I've no idea how representative this sample is of Schneider's work (I think it's my first experience of it) but there seems to be at least something of a common thread int he way he uses quasi-repetition of forms (not in a minimalist sense) that, over time, result in something larger than the individual elements.

"Zeitgehöft" (the title of a collection of poetry by Paul Celan, generally translated as "Timestead") is for two pianos that sound retuned (maybe only one of them?) and consists of strong, dark, rounded chords, somewhat staccato though with silences between allowing the notes to sustain in the room. Initially opaque, the resolute continuation of the particular attack succeeds, for me, in creating a special world with odd logic, where the stuttering steps can be heard as a kind of hesitant dance. This piece grew on me each time I listened, very moving ultimately.

"Sternstunde" (great moment) is an astrological term and the six movements alternate between "Ahriman" and "Luzifer", the former a Zoroastrian deity and the latter, well, Lucifer. It's scored for two speaker and two singers (male and female in each duo) with two other musicians providing "noise. The latter occurs in sweeping, wavelike sounds that occur between movements, imparting a very cleansing sense. The distribution of the text between speakers and singers is extremely effective (not sure if there's overdubbing or if substantial use of the echoing aspect of the performing space is in play, but the vocal sound is wonderfully cloudy and rich); it sounds as though there's a kind of "round" in effect, the cycles of each part ever so often coming into sync, almost unison, then going out of phase, back again and so forth for the entire hour. It's sung/spoken in a kind of declamatory style, with a regular, even plodding meter, though that's part of the mesmerizing effect. Apart from the change in text, there's only slight variation in the musical approach, though minimal as it may seem, certain sections are noticeably more "transparent" than others. As implied above, the sheer accumulation of this attack, and maybe a subconscious appreciation of the underlying logical structure) tells over time. Soon you've become quite accepting of this world. I think the text is from Christian Friedrich Hebbel, a 19th century German poet, though I can't find any direct reference for it. I have to say, although it won me over, I could easily understand if the relentlessness of the approach caused other to find it wearying.

"Meridian", based once again on Celan, is tougher for me to grasp. Less overtly obsessive than the two prior works, we hear a succession of episodes (again, six), with strings playing microtonal glissandi (inevitably, due to my having first encountered it there, I think of Penderecki), rather disembodied voices, tympani, piano and more. There's a lot going and doubtless much I'm not apprehending but, while the passing moments often convey an odd, hazy kind of beauty, I can't get to the logic of the piece and leave unsatisfied. Might require a guide on this one.

"Augenhöhe" (eyes high) cites Hebbel but mirrors the first in an oblique way, consisting of short phrases played by Dominik Blum on a Hammond organ, sixteen or so quick, fleeting notes (possibly always all different?), placed between periods of silence lasting about sixteen seconds. The phrases are as playful as they are seemingly random, bouncing gaily and, given the silences, acquiring a subtly plaintive air. Quirky, elfin and lovely.