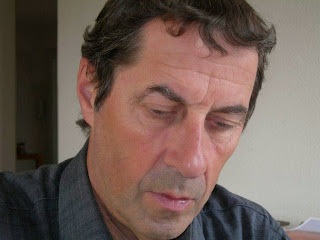 I thought I'd use a photo of Streiff instead of the cover of the disc which, of course, isn't any different from all Wandelweisers, save the specifics. Though the compositions are Streiff's you get the idea that Schneider is being given equal credit for the realization, causing me to wonder a bit at the degree of freedom the latter had, especially given the apparent nature of the pieces which, I have to say, I feel somewhat ill-equipped to evaluate. I mean, I like them very much, find much of the work quite beautiful, but I've the feeling of being in over my head, the music seeming to operate in a "classical" context that's far enough outside my experiential frames so as to render nil any judgments I can make.

Strangely, one of the impressions I had, was of a composer, a "serious" classical composer, sort of doodling at the keyboard. This is not meant in the slightest to be disparaging--just the opposite. There's a sense of wonder at the image of these figures just flowing out, seemingly without forethought. Not improvisations as such, more a sketching out of forms within a few frameworks, works in progress, ideas to be fleshed out. None of this is the case, clearly, though that conflict of the image I'm holding with what I know (or assume) to be the reality is also very fascinating. Apologies for the blather, tough to sort out.

Brief notes are provided for each piece, fairly impressionistic ones like, "Recognizable fuzziness, hidden clarity, a simple development" or "Agitation within, shifts at the margins". Whether any systems were in place, how much space Schneider (who plays gorgeously throughout) was allowed, I don't know. The music unspools slowly, even languorously, is more or less tonal for the most part, edging into pastoral now and then. There's the occasional nod to minimalism, but that's rare. Maybe a tinge of Satie's Rosicrucian period, not sure. Some verges on the strident, some is dreamy. It sounds both plain and unique; odd. There's a short portion of "Neun kleine Bässe" with six softly descending notes, a couple of blurred lower tones, a squiggle of mid-range ones that's haunting, eerie and wonderful.

So, apologies for the mishmash of a write-up. Please disregard the confusion here and simply listen for yourself--it's excellent music.

Did you know you can shorten your long urls with AdFly and make cash from every visit to your shortened urls.