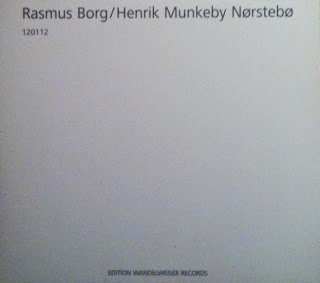 Sometimes Wandels appear with substantial info about scores of methods of actualization, sometimes not. Here, there's only the cryptic inscription, "entrusted to each other from the outset, at each other's mercy" which, to me, implies improvisation, though who knows? Whatever the case, the three pieces presented by Borg (piano) and Nørstebø (trombone) are spellbinding explorations of the low tone.

Three pieces but they segue into one another effortlessly and, with the possible exception of slight variation in pitch (and I'm not even sure of that) are pretty much indistinguishable from each other unless I missing some subtle pattern shift. The sounds are all low and sustained--bottom of the keyboard piano and extremely low trombone (the disc says, simply, "trombone", though it sounds like, at least, a bass trombone to me). The trombone tones aren't quite Malfatti-pure; sometimes they begin with a slight growl, others with a half-step upswing, but they're routinely very rich and luscious. Sometimes, the pair start a phrase more or less in unison, usually with a slightly staggered entry, but often enough one or the other enters an existing line, melding in, playing a pitch very close to that of his partner. It's a very round sound, globular even, suspended among the near-silences. Listened to closely, you can pick up ambient noise, little clicks, bumps and the like, small but for me important in surrounding the music with a kind of sheath, giving substance to the air in the studio. It's difficult to say much more than that. The pieces don't really have a monolithic quality, but they're all rather (beautifully) self-similar, more like an underground seam, coal perhaps. I really enjoy it. 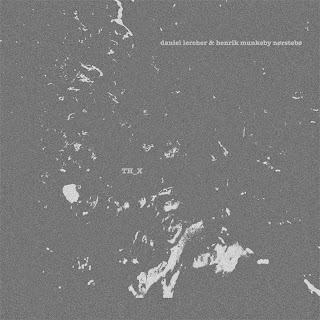 As it happens, fate also delivered into my hands another recording involving Nørstebø, a collaboration with Daniel Lercher (sinusoids, resonators, filtered red noise). "Red noise", I discovered, is also known as "Brownian noise" (as opposed to brown noise), that is, waves whose structure is (somehow) determined via Brownian motion. Nørstebø, here, initially explores similar, low-pitched areas for the most part, although Lercher's contributions, of course, are much different than Borg's, consisting at first of strong sine-like waves, pulsating and fluttering and, I suspect, doing funny things with regard to how the trombone is heard (though there may be some flutter occurring there as well. The pair splay outward from that on subsequent tracks, Lercher especially delving into more ragged, drier tones (the red noise, I'm guessing) and crisp pops, eventually ultra-harsh swathes of noise. Things continue to splay out as though, once released, boundaries are forgotten. It's a heady mix, Nørstebø's trombone becoming less recognizable as he plunges into breath/rumble territory, the electronics going more and more abstract, crackling, ragged. The last of the five cuts circles back, beginning in the storm then flowing back into the purer sine tones and hyper-deep brass that began the disc. Strong music, well worth hearing, also causing me to want to listen to far more of their work.