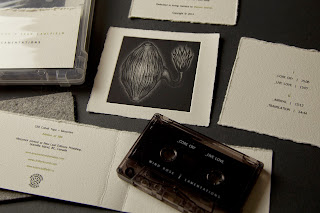 "Wind Rose" is Gary James Joynes and 'Lamentations' is a set of dark, relentless electronic drones created while in mourning for the death of his father. This fact necessarily calls to mind Jason Lescalleet's brilliant, 'The Pilgrim' but Joynes' approach is different, conjuring a sound-world almost entirely grim and, despite the plodding onwards evoked by the steady pulse (in the first track), purposeless, perhaps seething with some rage. The following cut is even bleaker, the sounds having taken on the mechanical aspect of a piece of large machinery, mindlessly cycling, eventually sputtering out. 'Arrival', the third track, is more agitated, itchy even, with rapid iterations of growl and static, but no less desolate. Then, about halfway through, it's knocked out of kilter and sent into a loose spin, a slow free fall that at least seems to offer a possible path out of the claustrophobic gears and turbines, edging into "An Index of Metals" terrain. In the final piece, 'Translation', things begin to churn, a certain kind of vital power seems to be generated. It slows however, begins grinding down, takes on the sense of a small airplane descending. No way out. 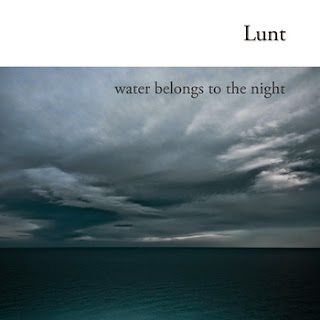 Lunt is Gilles Deles and this recording is rather the polar opposite of the preceding one. The label cites Fred Frith and Rafael Toral as influences and that can certainly be heard here, especially the mid-70s Frith of his initial solo release, an old favorite of mine. The first track also, I have to say, nods to Fripp/Eno but, as much as I love those recordings, i was happy to hear that Deles moves on from that attractive clime. A piece like "Stumbling Crystal" is Frithian, true, with it's spiky, ice shards delicately arrayed, but it's so inherently attractive that I forced myself out of an "influential" mode of appraisal and just enjoyed it. Still, I was also happy to hear a harsher tack taken on the ensuing cut, "Poison goes back to the ground", and even happier when Deles pulls out the stops on "Golem of fire", channelling Fripp to a degree but, again, doing it quite well. He gets harsher still on the penultimate track, ending in a stuttering, staticky grind, but ties things up peacefully on the final piece, with soft, echoey plucking that, again, isn't earthshaking in approach but is done with taste and a fine ear. If that branch of guitarists appeals to you (as it does me), you'll find this an enjoyable listen.