this place/ is love 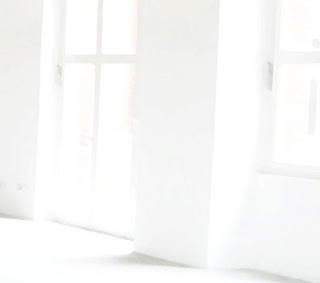 The work begins in very un-Wandelweiser fashion, with a strong note played on, I think, a harpsichord (prepared spinet?), quite forthrightly. After several identical notes, a recording of an interior space enters and a surprising sequence of chords occurs, four of them, very romantic in nature. Four more follow, belying the first quartet, somewhat sour, then three more, ambiguously between the first two sets in feeling.

So begins "this place/is love" a kind of quiet epic (76 minutes in length) that, as with much or Pisaro's recent work, resists easy encapsulation or structural grasp. I say "Pisaro" as I have the impression that the more strictly musical elements of the piece strike me as stemming more from him than Beuger, where the latter contributed the words, both his own and those from other authors (Anna Swir, Mei-Mei Berssenbrugge and Edmond Jabès) and perhaps the overall idea as well, I'm not sure. Blindfolded, I would have pegged this as Pisaro. Whatever the case, the composition is very expansive, the structures large enough to make glimpsing them in their entirety a task that's often beyond me. I'm told that in the first half or more of the piece, the elements repeat twice (some I can hear, some escape me) in waves, while in the latter portion elements are subtracted out; this last is apparent as sounds become far sparser in closing 20-odd minutes.

THe music unfurls calmly, each section lapping over its predecessor, reminding me of wax collecting at the base of a candle. The words are either spoken (often in a dreamily sing-song fashion that recalls Cage) or intoned, always softly and slowly. Perhaps the most jarring elements are those intonations which take some getting used to and connote memories of other music, some of which might be off-putting; some will doubtless hit on monastic singing though I make the weird association with some of the vocal segments of Centipede's "Septober Energy" so be forewarned. There's very much a sense of them sliding past each other and the adjacent sounds, like twigs and leaves flowing downstream at slightly different rates. The words center around aspects of love, including purity (even virginity), longing, the concept of "trace", ultimately channeling into the single Jabès line: "this place is love. it is absence of place".

For listeners familiar with the work of either creator, especially Pisaro, the various sounds employed will be familiar: smoothly modulated sine tones, nondescript (but fascinating) field recordings, single, pristine guitar notes, extended silences; that harpsichord is the one that stands out as unusual. But of course it's not about audio novelty but the sequencing and layering of those sounds and, here especially, their resonance with the text. To my ears this is brilliantly accomplished, in a, for lack of a better term, poetic manner that's next to impossible to quantify. A touchy subject, full of pitfalls, but they manage to avoid sentimentality while remaining subtly moving. It's certainly a contemplative, even melancholy appreciation of the emotion, not an aggressive, bodily-fluid approach, something that some listeners may find wanting (art gallery vs. the streets).

The work gradually dissipates, mere wisps of sound circulating amidst lengthy periods of silence. There's a sequence of isolated, identical guitar notes, one every 25-30 seconds, plus an extended silence or two, that essentially closes out the work, leading to that final, slow and considered reading by Beuger.

This recording won't, I don't think, change the minds of those engaged in recent Wandelweiserian debates on IHM and, more recently, on the eai Facebook page. I find it both elusive and fascinating, sometimes vaguely irritating (the intonations) but always recouping and retrospectively framing those portions in a way that satisfies. I wish I was able to "stand back" at more distance and really appreciate the form; will have to work on that. I've listened about a dozen times and have always enjoyed it, even after it "leave[s] no trace, like birds in the sky".