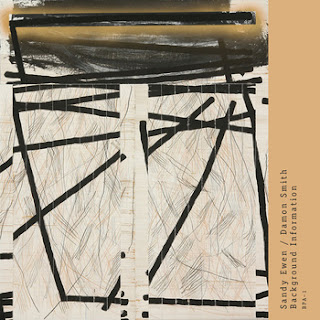 This release is unusual, for me, for a couple of reasons. One, I'm writing about it based on downloaded sound files heard over my Macbook, something I prefer not to do for obvious sound quality reasons but, that's how it was presented so all caveats therein apply. Second, the duo, guitar and bass with objects, laptop and field recordings, at least abuts on an area that I'm less than comfortable with, the more fervently active area of free improv, that space where my subjective sense iis one of claustrophobia, where, despite the appellation 'free improv' there exist entire worlds of sound that simply won't be admitted. I don't know Ewen's work as near as I can recall, but I've heard an amount of Smith's over the years and have noted that he often straddles these fussy divides, working with Rowe here, Kaiser there, etc. So I was intrigued. As is usually the case, matters are more complicated than easy preconceptions.

The first of four tracks indeed begins in that scratchy realm, the pair sounding as though irritating their strings with combs or other thin, plastic objects. It's an active, prickly 'scape, the sort I often lose patience with. about midway through its 21 minutes, however, the pair ratchet things down just a tad and it's enough to veer the music (to my ears) into a much more enjoyable area, one adjacent to the quite/rough work Rowe has been doing in recent years (with Sachiko M on "contact", for example). Later, some plucks acquire a crystalline aspect that's quite appealing, though the agitative approach also regains sway; an interesting, expansive track though, even if it gave me some agita. The second track begins even more forthrightly in the scratchy zone before veering abruptly into some deliciously sour dronage; again, a half and half experience for this listener. Similarly, even more so, for the next piece, ranging from more extreme assertiveness to delicate plinking over distant, tolling tones; I want to hear more space--the guitar especially, in those otherwise very attractive latter moments, feels intrusive and inconsiderate though, again, the very last sounds, over Smith's rich arco, are delightful. The final cut doesn't stray far either, more brutally rubbed strings here--you can feel catgut straining.

There's a sameness of surface that nags at me here. Every time I pick up Smith's beautiful low playing, I want more and I want it surrounded by either simply the room or adjacent to a companion who's willing to lay out more than Ewen. That approach, though, is very much in keeping with a certain method of attack and it's done quite well; it's just not my particular cuppa. As is, there are nuggets to extract here and "Background Information" is worth hearing, even by those who share my inclinations, if only to shake it up a bit. I'm guessing Smith is quite aware of these issues, perhaps doesn't consider them issues at all. Listened to as a kind of counter-argument to my preconceived notions, it's good, wry fun.

But you can hear for yourself here at Balance Point Acoustics.

Heard Sandy play a wonderful solo set here in Houston a couple years ago. Liked the record these two did with Weasel Walter also, but yeah, probably a little busy for your tastes.

Thanks for the great (IMO) review. I am super aware of the "issues". One aspect is that I feel that the many innovations of the EAI movement only become useful when they can find a place in a wider sphere of improvised music and beyond.
I don't think about this while I play, but I am super aware of that history. In any case, thanks for your sharp ears.