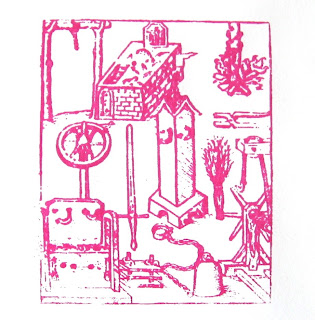 Hoffman's disc begins rather disconcertingly, with a spray of percolating electronics that immediately conjures up aural images of 70s sci-fi flicks, the psychedelic sounds an electronic brain would make while going haywire. In several seconds, though, it subsides into a dark, low set of tones quite at variance with those sounds, setting up a tasty dichotomy on the short track and leading one to what follows. Hoffman includes the inscription: Rules: Computer sets frequency, composer sets duration. I take it, then, that a program chooses when to switch attacks (the four pieces are subtitled, "sine", "square", "fm" and "mix", indicating, in three out of four instances anyway, the source of the tones). This removal of direct human intervention, in the case of sound like these, works pretty well, eliminating easy drama, requiring the listener to simply experience the sounds in succession. If anything, it might be the nature of the sounds, very "cold" in a sense, that could put some folk off. I was reminded of Marcus Schmickler's solo efforts of the last decade, tough nuts to worm one's way into (I note that these tracks were recorded in 2008, mixed and mastered this year). Then again, amidst the all the harshness, something incredible appears like the pings at the close of "Green Dust", wavelets that do marvelous things to one's ears. The longer title cut uses more varied sources, including field recordings, and somehow seems more "humanly" edited, the pieces flowing into one another less abruptly. It's very satisfying, a real strong track, and contrasts well with the preceding three. A good, tough recording, well worth hearing. 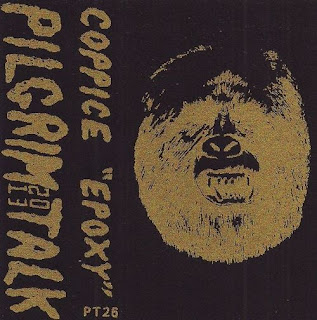 Utterly without intention, Coppice's "Epoxy" offers an example of intuitive use of diverse sounds that, while not unenjoyable, fails to connect to these ears as strongly as the programmed portions of Hoffman's disc (I'm guessing this will be a minority opinion). A cassette release consisting or two (or more?) trio versions of a piece called "Seam", as performed by some combination of Coppice proper (Noé Cueller and Joseph Kramer on bellows-oriented devices and electronics, assisted in some unspecified manner by Carol Genetti, Sarah J. Ritch, Berglind Tómasdóttir and Julia A. Miller) recorded in 2011-12. The music is fairly continuous and ropey, often rough-edged in nature, raspy and nodose; at lower volume levels, a hollow eeriness appears, sometimes recalling theremins from old horror films. A throb of sorts tends to be present, imparting a vague industrial aspect especially given the grimy nature of sounds. There are abrupt cessations, the music picking up in an entirely other nature yet, somehow, the feel I get is of more control and choice than in the earlier disc. Of course, this can and often is a fine thing but, perhaps unduly influenced by "Bruiser", I found I wanted to hear less of that, more impersonality. Tough to quantify--on the second cut, I'm reminded a bit of the NYC branch (Kamerman, Rosenberg, etc.) but without the kind of nonchalant incision that marks the best of their work. I don't mean to be so down--it's really a solid recording and I'm sure there will be others that get deeply into it more than I. It's just that I felt the elements could have been marshaled more powerfully with greater clarity and concentration. Please hear for yourself, though.