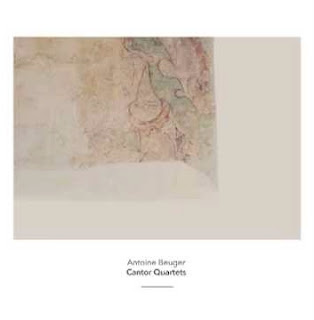 Admirers of Beuger have had little to complain about recently, this fine release coming on the heels of the Pisaro/Beuger collaboration on Erstwhile and just preceding a new one on l'Innomable. An excess of evanescent riches.

You can see a description of the piece here as well as a copy of the score. As noted, four pages out of 15 are presented on two discs here, the performances taking between 34 and 40 minutes each, presented by the rather stellar quartet of Jürg Frey (clarinet), Sarah Hughes (e-bow zither), Dominic Lash (double bass) and Radu Malfatti (trombone). Even without the explanation, the music is extremely transparent, the long, soft notes, in unison or adjacent octaves, accreting gradually, with vast silences between, the sounds emerging and disappearing like 15 minutes of morning light patterns on a wall. (looking at the Dan Flavin installation at Dia Beacon last week, I was strangely reminded of Beuger's music, though mentally substituting--if this is conceivable--a range of whites instead of Flavin's candy tones) Even more so than with much of Beuger's music, or related work, the listener is virtually forced to consider surrounding environmental sounds; more often than not, I find them to be central, tinged by Beuger's. This morning, someone in an apartment on our street was playing what sounded like a Middle Eastern flute, perhaps a ney; it meshed beautifully, as do cars and street sweepers. I was often unaware when a disc had ended.

I can imagine that performing the work is an exacting affair. So odd, and wonderful, that listening to it is the opposite. 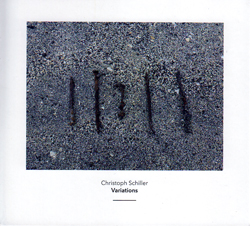 I still have some difficulty coming to terms with Schiller's music, probably due in large part to a genetic dispositive aversion to all things harpsichordian. (I find various definitions of "spinet", though most indicate at least a strong affinity to the harpsichord). As much as someone like Schiller does to mask it, that metallic buzz seeps in an incurs memories of everything from cheesy horror films to Paul Mauriat's "Love Is Blue". I do try to persevere, however. These variations comprise seven pieces, all between five and six minutes, and, in fact, form a progression from spinet to objects to piano in a symmetrical sequence (s/2s/so/oo/op/pp/p), largely utilizing extended techniques but with the occasional rich chord plunked down. I prefer the latter portions, the richness of the piano(s) simply more appealing to these ears, even when infiltrated with objects that cause vibrations not so dissimilar to the spinet. There's a bit too much scrabbling about in some parts but when Schiller pauses and listens, as in Variations 6 & 7, the results are entrancing. Curious to hear more and would like very much to catch Schiller in concert; I've a sense that many of these sounds would tickle my ears more in a live setting. 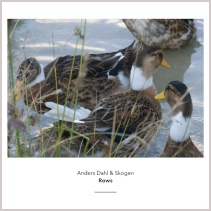 I was one of the few listeners to have a so-so reaction to the previous Skogen release, which appeared on any number of year's best lists. Well, I enjoy this one a good bit more even if I still somehow expect more, especially given the participants: Angharad Davies (violin), Magnus Granberg (piano, clarinet), Ko Ishikawa (sho), Anna Lindal (violin), Toshimaru Nakamura (no-input mixing board), Henrik Olsson (bowls, glasses) and Peter Wästberg (contact mic, objects, feedback) with Eric Carlsson (percussion) on two cuts.. Here they perform nine "rows" (apparently extracted from a lengthy series) by Anders Dahl, shortish tracks lasting between two and eight minutes. I take it scores are involved, possibly graphic, but the pieces share a certain sensibility--calm but very concerned with sound color and differentiation, the long tones of the strings, sho and glassware blending with harsher, more abrupt ones from contact mic, piano, etc., though the instrument swap these sort of roles regularly. On "Row 35, for instance, the piano and glass strike ringing, pure tones whilst scrabbling goes on around them, eating away at their clear surfaces. "Row 24" also plays with that kind of contrast, here between strings/sho and electronic crackles/percussion. The brevity of the tracks imparts a jewel-like character to the piece, something from which they benefit; there's a nice concision in play. I might have liked to hear more variation in the works though their similarity may be in keeping with Dahl's use of the term "row". An enjoyable effort, one that wormed its way onto my good side after several listens.