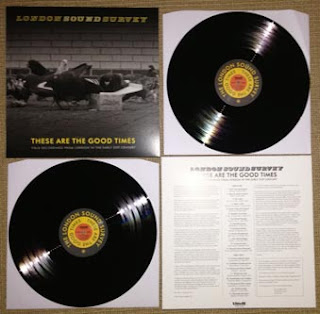 Ian Rawes/London Sound Survey - These Are the Good Times (Vittelli)

So here I am, trying to make qualitative sense of the post-Cagean field recording world wherein, among other issues, one's ears become attuned the wealth of sound in any arbitrarily chosen situation and this tasty item appears, proudly "old-fashioned" insofar as targeting specific "interesting" sound-worlds, creating just the sort of post card compendium that you'd think we'd grown away from. Yet it works, dammit, it certainly works.

The 21 tracks on this LP date from 2009-2012. I think it fair to say that even those of us who try to experience the surrounding world with some amount of aural equanimity are still embedded enough in the day to day world that we're drawn to noise with specific form, often social in one respect or another. These tracks are like that, the kind of scenes that would naturally attract attention. Sometimes this means performances of a sort, whether a Caribbean song gathering, a trumpeter busking or a street poet. Other times it's the general clamor of early morning in an urban area, the clatter and gab in a cafe or birds mixing with sirens from a refinery. Then there are the odd micro-worlds of a flying ants' nest or the sonar clicks from a bat. Rawes writes, "Some of these London sounds were found by design and others mainly by luck, but none were collected in a purely random way. Everyone sets out to record with an agenda." That's at least part of the interest here, the sense that the collector is pursuing sonic game, though this may well clash with the ideals of many a modern field recordist. Another key factor is that, unlike most disc-length field recordings that cross my desk, the tracks here are short, often about a minute long, rarely more than three, creating a very songlike feeling, a choice that works beautifully. As well, the recording quality itself is excellent (the pieces were mastered by Graham Lambkin), always embedding the central focus, whether a trumpeter playing 'Ave Maria', someone wielding a dickeybird whistle or cadging cigarettes into the broader context, really cementing them there, in fact. And that polyphon music box!

Some of the best "songs" I've heard this year, in fact. It's a real jewel in this area, quite apart from most; don't let it slip by.