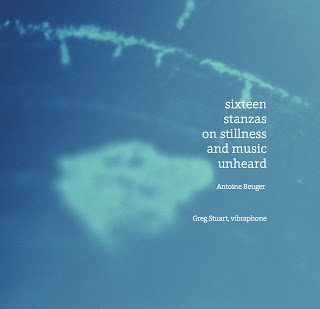 One of the quandaries I have, as a listener, when experiencing the music of Beuger and like-minded composers is the unavoidable reactive variation between simply hearing the music "innocently" and knowing something about the score and the composer's intentions. In a live situation, this is interesting enough, though I can't go back and revisit the music once (as is typical) I take a peek at the score or talk with the composer/instrumentalist(s) after the event. On disc, a was the case this time, I'll typically listen a number of times knowing nothing about the work other than is indicated on the sleeve--I hadn't read Greg Stuart's notes on the l'Innomable site--and then, often, try to ferret out some information as to the structure, intent, realization, etc. Inevitably, I then hear the work differently. I'm never sure whether this is "good" or "bad", but it's definitely the case.

"sixteen stanzas on stillness and music unheard" dates from 2003 and was designed for "sixteen instruments of the same kind". Here, Stuart plays all parts on bowed vibraphone. The score calls for the performers to be arrayed around the audience, so our listening experience is substantially different from the original intentions. The sixteen stanzas each consist of seven whole notes; stanzas 1-5 are played by all sixteen instrumentalists in unison (or close to unison; they're given, not surprisingly, some leeway in how close they approach the notated pitch and which octave to use), stanzas 6-8 by two octets playing two different lines, stanzas 9-10 by four quartets playing four different lines, stanza 11 by eight duos playing eight different lines and stanzas 12-16 by 16 "soloists" each playing a different line; there are substantial spaces between stanzas. As Stuart mentions, even though the vibraphone wasn't tuned differently for each stanza, microtonal fluctuations were inevitable due to variables such as position in the stereo field and other studio ephemera.

So that's the nuts and bolts--what does one hear? Periodic clouds of sound, growing increasingly, though subtly complex as the piece progresses. The bowing eliminates any percussive attack--I initially thought e-bows might have been used, but that's not the case--resulting in shimmering masses that are both overtly attractive and rather obscure, the various superimposed notes creating a kind of haze. You know when you're trying to see a faint star and find that it's more easily seen when looked at indirectly? I find the music hear more enjoyable when heard that way, listened to in a glancing manner. Concentrating on it is tough; the sounds resist the kind of mental categorization that, unfortunately but all too commonly, is a part of the listening process. In this case, it's almost certainly a recording artifact. Were I situated amidst sixteen players and (more) aware of the spatial aspects and the direct play of microtones on my eardrums from various directions, it would be a drastically different experience. Here, localized in two speakers, I find it preferable to remove myself a bit, to (for example) go out on the balcony which is nearby my desk in our new digs, to hear this ghostly emanation coming from inside the room, coloring the exterior sound world. Though, as the polyphony increases, I'm aware that I'm missing out on a huge amount of subtlety. Frustrating! As with much of Beuger's music (and interpretations thereof) there's a vast amount of complexity lurking beneath a deceivingly simple surface. It's harder than you think but very, very human. Excellent work, hear it.

I am happy to find this content very useful for me, as it contains lot of information.