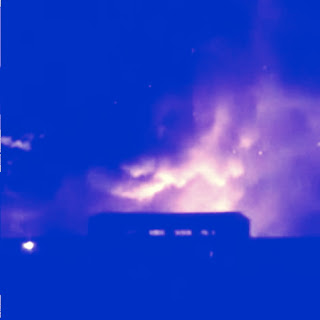 Every so often, pizMO emerges, bearing news from the Nantes noise scene--Christophe Havard, Jerome Joy and Julien Ottavi. Although not always the case, "noise" in Nantes, in my experience, carries less of the adolescent, rock-oriented vibe that it often does elsewhere, instead tracing its lineage back through the likes of Tudor ("Rainforest" was just recreated there a couple of weeks back by Ottavi and the crew at apo33). Make no mistake, "blst" is every bit as explosive as its title connotes, but one has the impression of hearing hyper-magnified activity that occurs at some micro-level, possibly within the entrails of DIY electronic devices of great complexity. It's a massive, 53-minute block of sound in one respect, but that block is a conglomerate, permeated with materials of varying density and color as well as pockets of air (or other gaseous substances). Hard to escape the aural illusion of magma, liquefying in immense heat, congealing into a smoky crust, fracturing, on and on but at the same time semi-alive, as though lava-based creatures are in the process of being formed. There's a danger of over-satiation; ensembles like pisMO tend to eschew sparseness and silence, requiring a constant bob and weave from the participants as they negotiate their way through a more viscous medium than classic AMM or post-AMM environs--no time is spent in contemplation. Now and then, they run up against a wall, sputter, emit a silly or teeth-grating sound or two, but generally they do a really impressive job at creating a living, variegated form. As with much of the successful music in this neck of the woods, I'd love to have heard this immersed in a large space, hordes of speakers surrounding. As is, "blst" is a fine document, robust, writhing and tentacular.