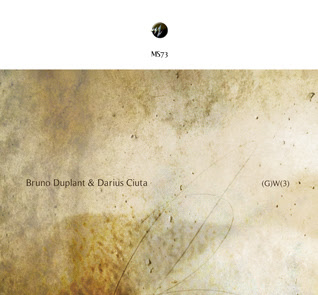 I'm not precisely sure of the background to the two pieces presented here; apparently they're derived from scores by Ciuta, a Lithuanian musician/composer. Whether he contributes directly to the (presumably) long-range collaboration or whether what we hear are Duplant's realization on his own isn't apparent. In any case, we experience some 79 minutes of subdued, atmospheric sounds (very much in keeping with much of the label's output) that carries vague nautical connotations to this listener--distant foghorns, the knocking of floating objects against wooden pilings, a generally aqueous feel. The music is simultaneously rich in terms of detailed layering and almost uniformly quiet, enough so that, at times, it almost fades out entirely. It's also sonorous and rounded, entirely "unobjectionable" which may be a positive or negative attribute depending on the listener's predilections. Every so often, for example near the 30-minute mark, there are hints of far away conflagrations, shards of sound that might read as harsh were they closer at hand that serve to inject a degree of necessary abrasiveness lest the affair become too lulling. More descriptives would only belabor the point. Some may find it too long and self-similar for sustained concentration, others may not (I don't). Some may prefer to use it in an ambient manner, for which it works fairly well. A good recording, to these ears, very satisfying, like lying down in an isolated, sonically intriguing environment, waiting for a nap that never arrives.

It would be curious to gauge the reaction of the droves of O'Rourke-oids who find their way to a release like this, now that Jaeger has been singled out as a new-found favorite. Given that it's a run limited to 200 copies, better get yours quickly. I'm guessing this "ritual" is one of Jaeger's own devising, as I googling pretty much results in this disc alone, but he seems to want to harken back to the possibility that similar events occurred in times past in this region of central France. Tee result is a combination of on-sire recording (insects, pond sounds, presumably more) and Jaeger's contributions to the landscape, including wood, bones and, to be sure, processing. As with much of his previous work that I've heard, there's an underlying pulse of sorts, though never so prominent as to be intrusive, more a series of varied throbs that oar the music down its sluggish waters. There is a humidity or sorts in play here, a "closing in" of the surroundings, though perhaps my ear-to-brain connection is overly influenced by the shamanistic photos in the booklet. Something doesn't entirely click for me here; perhaps it's simply the knowledge that a ritual is being invoked, however obliquely, and I'm not too keen on the general subject, imparting, for me, a hokey ambience. Maybe it's also the heavy hand of post-production, as when cycles of sound clusters are iterated in a manner that, however blurred, imply a mechanical aspect that conflicts with my image of the nighttime countryside. The second half of the disc is more stable, fairly steady-state and works the better for that, though still, I can't say I found it gripping; listenable but not so memorable, not nearly as memorable, I imagine, as sitting out in that field may have been.