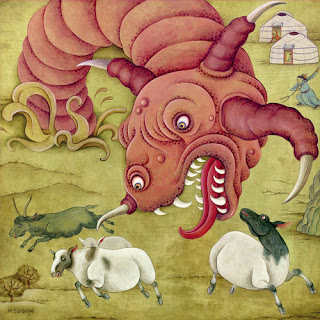 It's fun to imagine the 33-minute track here as a kind of sonic recreation of this acid-spraying, electric shock-emitting beast, though in truth, the music is calmer than that, the turntables and nimb churning away in an absorbed, often contemplative attitude. Given the instrumentation, I was greatly encouraged by the mere fact that it didn't sound so much like other things in the area, very much retaining a unique character; no would be Nakamura here. Krotevich seems considerate and careful, navigating from space to space, investigating carefully, then moving on. His death-worm is of the ruminative variety. The piece begins with a low hum which is actually a sequence of globular, liquid pulses, very rapid but subdued, gradually incorporating iterated, broom-like swishes. Elements ebb and surface, not unlike many such ventures, but a) the sounds chosen almost always have a rightness to them and b) Krotevich has divided the work into discreet chapters; in this case, the breaks are welcome and often come at a time when the listener is feeling the tiniest tingle of discomfort with what has been transpiring the previous few minutes. Very well played. A loudish portion midway through uses intense staticky and whining sounds, the death-worm zapping the odd goat or nomad. That's preceded by a wonderful passage that sounds like decayed rotary telephone dialing adorned with crystalline pings that's inexplicably moving before it flutters up into the noisier segment. The disc concludes with a low, rumbling hum, the satisfied stomach sounds of the death-worm as it winds its way back across the sands.

A really fine effort, worth seeking out. 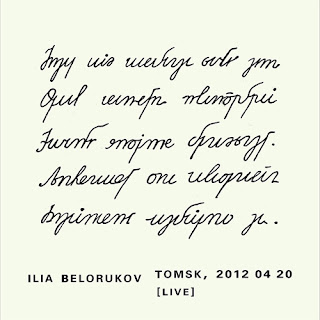 Solo alto sax with preparations--treacherous ground to cover but Belorukov does pretty well. Three sections, the first what I always think of as "metal tube dynamics", the harsh scouring sound I often associate with Martin Küchen. Belorukov begins at medium volume before slowly becoming quieter and quieter, incorporating low key pops and soft squeaks; very nice, almost narrative flow here. The next piece uses soft cries and harmonics, presumably inspired by shakuhachi playing at the start, continuing on into low, quavering seesaws of pitch shifting. Again, very well done, sounds spread over a fair length with excellent concentration and fine allowance for space. The third track is very interesting, at least in the sense that I'm hearing it, as a kind of response to the saxophonics of players like Roscoe Mitchell(in the opening portion, all high, abrasively pinched tones) and Peter Brötzmann, in the mid and later stages. There, Belorukov still seems (happily) reluctant to automatically lurch into high volume, instead trying to negotiate Brötzmannian sturm und drang in a restrained manner, a quixotic venture to be sure, but one that's fascinating to hear. Indeed, the more I listen, the more a sense of Braxtonian categorization seems to be in play, a similar concentration on one or two essential elements in the improvisation and and elaboration of same. But whereas Braxton's have long since acquired an air of the formulaic, Belorukov, at the very least, brings a freshness and sense of discovery to the fore. If you haven't entirely given up on the saxophone's role in this area of music, "Tomsk" is a great place to rest your ears for a while.