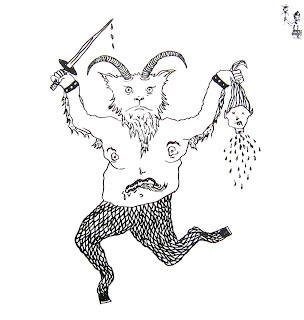 Fans of the musicians associated with the Seoul axis (and I'm one) have certainly come to expect a fair amount of...difficult listening. Edges are usually not just rough but rusty and jagged. This collaboration with the American Nick Hoffman, recorded in Seoul in 2009, might actually stretch that metaphor into the poison-coated zone. It's severe. Excellently so. One is almost tempted to say, "malign". It's a couple of harsh, harsh tracks spread onto two sides of an LP (also available for download at bandcamp, code: gmbx-k37p), scouring one's ears, upsetting the dog, making the room deliciously uncomfortable, flinging detritus, emitting high screech after high screech, refusing to accede to any categorizable form, resolutely opaque. 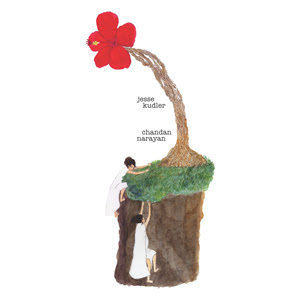 Kudler (electronics, guitar, radios, tape) and Narayan (autoharp) in a live performance from Seattle in 2010. My first listen to this 20 minute track left me with the feeling, "Ok, nice enough, not so exceptional". Subsequent listens might have reinforced the non-exceptionality of the performance but there remains much to enjoy here. It is quite AMM-ish inn general character so that's the sense that one's initial reaction may be: I've heard this before. But over the course of time, I felt more and more, "So what?" They do it very well, interest is sustained, there's the enchanting and not-frequently-encountered sound of Narayan's autoharp, the piece has a solid dynamic flow, seems unforced and flowing. It maintains a fine contrast between the gentle and the violent, never straying too far in either direction but letting you know that the pair is aware of those boundaries. This kind of reaction on my part calls into question one's (my) discernment during a live event. Had I heard this in, say, a festival environment, one out of a number of performances, the sole experience may well have blended in with others, it may not have stood out. Just got to show that even if, at the end of the day, it's not a knock-your-socks-off event, that there's much of value that one (me) is likely missing.

So, glad to have the recording; nice work, repaying many listens.