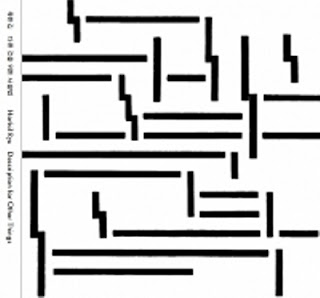 The eternal typewriter. A text, by Hankil this time (presented in booklet form in both Korean and English), that's essentially repetitive though varying, self-referential with regard to the act of typing, is typed. There are timings at the base of each page, presumably to mark one's place if reading along. I declined to do so, quite possibly missing out on something of the experience, though Lisa Thatcher did just that and had some interesting thoughts. I take it that preparations of various kinds were employed, unless the Clover 10S Korean typewriter has some unusual inherent sonic properties.

In any event, the pure sounds are pretty great and unexpected. There's a typewriterly quality, yes, in both the rhythms heard and some of the basic sounds but there's a whole lot else besides. A straining motor on the verge of feedback is prominent early on, for instance. I'm curious as well about the extended identical percussive beats that belie "typing" in the normal sense of the word, instead sounding like someone resting on the space bar, itself aggressively beating out a steady rhythm with which it's not normally associated. Indeed much of the set is surprisingly up front and bold.

I'm not sure I totally buy into the greater value of listening to typed text in the sense of its revealing any hidden depths but, as a buttress for the pure sonics involved, it doubtless adds a layer (or more) of interest. As is, it's a pretty fascinating and absorbing aural document, one I enjoyed greatly and, I'm sure, would really love to experience live, all the more so if it was simply "occurring" and not explicitly presented as performance.

Worth checking out, well worth it. 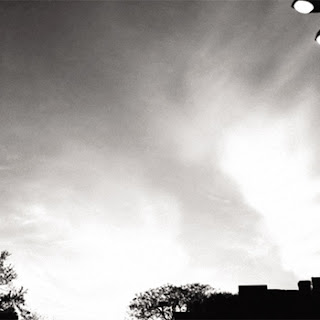 I've tended to enjoy Fages' music very much in past years, no matter in what guise it appears. This one, dedicated to the producer of Etude Records, seems to have a lot going for it though, after the fact, I have something of a fuzzy feeling, in the sense of, "what was that that just occurred?". Not sure if that's good or bad...

It's one long (42 minute) piece, for electric guitar and walkie-talkie, though I'm not certain of the function of the latter. The bulk of it is framed by two sections of mildly severe feedback, that central heft consisting of lovingly strummed guitar not so distant from Loren Connors. It's an area I have a natural affinity for and I've like quasi-similar forays of Fages in this neck of the woods in the past. And, as it's occurring, I do find myself getting comfortable but perhaps it's just a shade too languid for me. Had it been a 15 or so minute track on a disc with other pieces, I think it may have settled in better. It's like a long, slow Fahey exploration that hits any number of wonderful nodes but doesn't quite jell into a cohesive enough form. Though, as always, perhaps that's what Fages was shooting for.

As is, even if I'm not entirely satisfied, it's an intriguing addition to his varied canon, one that admirers will want to hear.

Walkie-talkies are easy to make feedback on... maybe that was their role?