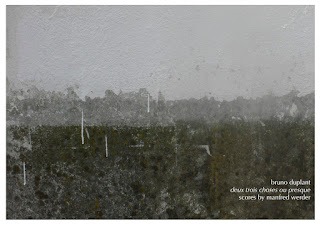 The first reads (in English):

There, in a house that I know well, to remoulins, a courtyard, and another at King's gray, each inhabited, decorated with a fig or two

the word GLASS OF WATER is somehow appropriate to the object it designates ... starting with a V, ending with a U, the only two letters or vase-shaped glass ["Verre d'eau" in French]

One first hears the sounds of a bucolic landscape atwitter with birds, water somewhere back there. Little by title, you become aware of subsidiary sounds introduced directly by Duplant, soft, almost lush hums generated--how? Bowed bass, sine tones and a horn are listed though the sound is smooth and quiet enough that, sometimes, it could be any of them. There effect is not dissimilar to Pisaro's "Transparent Cities" and almost as magical at times. I take it Duplant created the music in situ and part off the charm is picturing him standing/sitting out there, listening, contributing.

The second and third works are urban, dark arco bass making its presence felt steadily though still blending wonderfully with the engines, the sirens, that background hum possessed by any city.

It remains, to me, a fascinating question as to what effect the scores have on performances such as this aside to suppose that, had they not existed, some other action would have taken place in these spots, that Duplant would have been elsewhere, otherwise occupied. Given the exquisite sense of integration and balance that he brings to this recording, that would seem to be more than enough. In each, he simply becomes one additional sonic element in a pre-existing soundscape, no mean feat. A fine, fine work. 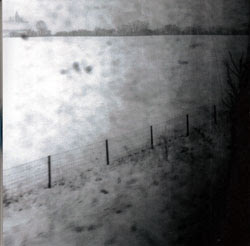 Chambel (guitar, microphones, objects), Duplant (snare drum, objects, radio) and Heraud (alto sax) fashion a softly busy 45 minutes of what I tend to think of as pared down efi, almost as if someone had taken an Emanem release and bleached out much of the (excess) coloration, leaving behind a kind of spine or sea-molded shell. The action is fairly constant, the gestures somewhat familiar in that sense, but they manage to carry a different feel, one that's much more enjoyable to this listener. While it, of course, varies over its length, there's something self-similar about it as well, int he sense of any random one-minute excision is roughly comparable to another, so there's the additional feeling of a kind of phantom drone, though there's nothing overtly drone-like about the music. Not sure what else to say except that it's somehow more interesting than one expects, that the poise of the players and the choices they make work rather well, obviating any untoward associations the jaded listener might possess...

This, the first release on Rhizome, can be downloaded here